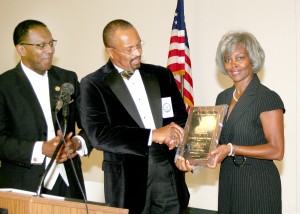 JACKSON—Twenty-six years after his untimely death, education pioneer James H. Jones was honored for his dedicated work for civil rights, justice and equality.

On Saturday evening, Anna Jones accepted a plaque on behalf of her late father from the Northampton County Branch of the National Association for the Advancement of Colored People (NAACP). Various elected officials, community leaders and citizens gathered at the Northampton County Cultural and Wellness Center for Northampton County NAACP’s annual Freedom Fund Banquet. The event was filled with music, prayer, humor from Northampton County Commissioner Robert Carter and words from Rev. Curtis E. Gatewood, the second vice president of the North Carolina NAACP State Conference, who served as the guest speaker.

Born to a family of sharecroppers in 1916 on Longview Plantation, Mr. Jones learned the importance of education when his own was cut short because of work and Jim Crow Laws.

Jones rejected his plight and eventually became the first African-American to serve on the Northampton County Board of Education. His appointment to the Board of Education came in 1971 and he was voted chairman 10 years later. Jones’ life and work ended tragically in a farming accident in 1984.

“He came from humble beginnings and was a sharecropper farmer,” said Northampton County NAACP President Bennett Taylor. “But he paved the way and opened the door for equality and quality education here in Northampton County.”

Bennett said Mr. Jones served amidst school desegregation and during a time when there was a lot of racial tension within the county. He continued by saying that though Mr. Jones’ goal was to ensure a quality and equal education for children, he was often called an “Uncle Tom.”

“He was instrumental in opening the lines of communication between the races and later the foundation for progress and race relations in this county,” said Bennett. “He was truly a pioneer who led the fight in equality education.”

Anna Jones accepted the plaque on behalf of not only her father, but her family members, many of whom were in attendance. Jones thanked the members of the Northampton County Branch of the NAACP for recognizing her father’s work.

“My brothers and sisters and other family members who are here are truly, truly honored this evening,” she said. “We are proud because Mrs. (Diane) Gallimore and President (Bennett) Taylor and the committee looked into Northampton County’s rearview mirror; they spotted a valuable legacy, they retrieved it from the trash heap of history and they have brought it forward into the 21st Century tonight.”

Jones is currently working to capture her father’s legacy in a documentary called “Chairman Jones: A Portrait of My Father.”

For the past two years, Jones has made trips to Northampton County with a crew from Tree House Productions, based in Hillsborough, to interview those who knew her father. Jones said that project has grown into a general documentary film about education and history in Northampton County.

Jones shared a story from when she first began her research for the project. She credited an employee from Northampton County Schools with rescuing her father’s portrait in 2008 when Central Office staff was relocating to the new Central Services Building. She said the portrait had been left behind with “all the other old stuff” and the employee purposely removed it and hung it in a small conference room in the new building.

“He said, ‘I could not let them leave him behind, he meant too much to us’,” Jones said quoting the employee. “When I was finished, I knew I had to keep going (with the documentary) regardless. I had to tell the story.”

The project is currently being sponsored by the Southern Documentary Fund, but contributions are needed to complete the project.

“Inspiration alone will not get the job done,” she said. “It’s going to take all of us, it’s going to take your participation, telling me about your experiences, what you know about the desegregation era, my father’s leadership, and I’m going to need some financial support to get this documentary film done.”

She concluded, “In the end, we will illuminate the story of our great struggle for equality here in Northampton County, for ourselves, for our children, for the rest of North Carolina and for this nation.”

Rev. Gatewood sent a message of unity to the audience during his speech.

“There is no one nation under God without God’s truth,” he said.

Gatewood referred to the Bible where Jesus is speaking to the descendants of Abraham and Christ is teaching them the importance of truth and how, if truth is accepted, you will become free. The descendants rebutted that notion stating, how can they become free, when they have never been slaves.

Gatewood that that is a vital question today as you look at the history of the United States, in that not all people have served as slaves.

“So when they hear messages such as, ‘Ye shall know the truth and the truth shall make you free’, maybe some of our brothers and sisters who have never served as slaves feel like that doesn’t apply to them,” he said.

Gatewood said what Jesus is saying is if you sin you are not free, because sin will keep you in captivity.