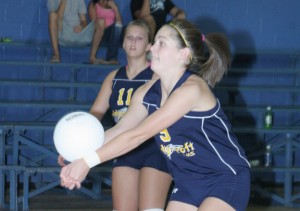 “We had a couple of bad outings in a row,” Ridgecroft mentor Susan Oliver said. “We served about 55 percent against Albemarle and not much better against Pungo. We lost both of those games because of our serving.

“Today, I thought we bounced back in that area,” she said. “We served the ball fairly well and attacked it more. I think that was the difference.”

Ridgecroft got things started well on the first point of the match when Lauren Colson had her first kill of the afternoon. Mary-joe Harrell served the first three points for the Rams who led 3-0.

The teams went back-and-forth until Northeast’s Brittany Bolton recorded a dig that the Lady Eagles returned for a winning point. Sarah Taylor Best then scored on her serve as Northeast closed within 6-4.

Sara Hackney, however, answered for Ridgecroft as she served five consecutive points to give the Lady Rams some breathing room with a 12-4 lead.

Ridgecroft junior Taylor McKeel’s dig two points later gave Ridgecroft back the serve and Harrison made the most of it, recording an ace on her first serve and then rolling off two more than were unreturned as the Lady Rams surged ahead 20-6.

Northeast stopped the serve, but couldn’t keep hold of it themselves and Harrell served the final four points, the last of which came on an ace as Ridgecroft won 25-7.

In the second set, Harrell again started things for the Lady Rams as she served four straight points after Ridgecroft won the first one on defense to make it 5-0.

After stopping momentarily when the Eagles won a point, Colson took over and rolled off four straight points, including an ace to push the Ridgecroft lead to 9-1.

Morris added a tip for the Lady Rams and Nikki Smith had three service winners as Ridgecroft surged ahead by a count of 14-2.

Following an exchange of possession, Harrison had four straight points on serve including an ace and a tip by Morris to take a 22-8 lead. Katie Blowe served the final two points for Ridgecroft as the Rams claimed a 25-9 win.

Both teams started slowly in the third set with Northeast edging out to a 2-1 lead and Ridgecroft rallying back to lead 3-2  thanks to a serve from Colson. It was Colson who was able to help Ridgecroft pull away as she served four straight points, including an ace to give the Rams a 6-2 edge.

The key for Ridgecroft in the final set, however, was Hackney, who rolled off seven straight points on her serve to help the Lady Rams pull out to a 16-4 lead.

Northeast stopped the serve, but Ridgecroft came back to pull away and win by a count of 25-12.

Ridgecroft will be back in action today (Thursday) when they travel to Hobgood Academy while Northeast is on the road today at Terra Ceia Christian.

What a week in football. Between the real start of the NFL season and what was hyped to be one... read more