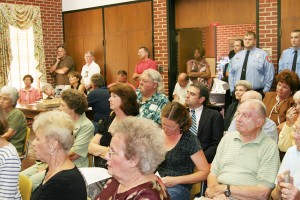 It was standing room only in the Murfreesboro Town Hall on Tuesday where citizens came out in support of Town Administrator Lee Capps who was dismissed last week. Photo by Amanda VanDerBroek

Last Thursday, the Murfreesboro  Town Council voted unanimously during a special called meeting to dismiss Capps who began work with the town in June. The decision concerning Capps was  based on “failure to perform administrative duties in a timely and efficient manner and failure to inform Council of projects being worked on,” according to closed session minutes.

At a regular meeting on Tuesday, council heard from four citizens during public comments all of whom were frustrated Capps had been terminated from the position and asked the council to reinstate him.

Before the speakers came before the council, they were reminded by Mayor John Hinton to keep all comments within three minutes for each speaker and 15 minutes for one topic.

Kenny Thomas, who moved to Murfreesboro a year ago, said by chance he had heard about the special meeting and attended.

“I was surprised to find out I was only one of three citizens in attendance,” he said. “I was even more surprised to find the sole purpose of that meeting was to consider firing of our new town administrator, Lee Capps.”

Thomas said the council met for approximately one hour and 20 minutes in a closed session and then emerged to give their decision.

He continued by saying that he asked council for more specific information about Capps’ firing. According to Thomas, he was told what was discussed in closed session would not be communicated to the public under any circumstance.

According to North Carolina Closed Meetings laws, a public board may meet in closed session to discuss personnel matters.

“I was shocked by this action,” Thomas said about the council’s decision. “My first thoughts were that his firing had been handled inappropriately and the council had not been initially unanimous in their support of the measure given how long they deliberated.”

Thomas said the firing of Capps was inappropriate because anyone who has been in a management position would know the best course of action would be a written warning followed by a probationary period in order to give the employee a chance to perform up to acceptable standards.

“As for who was or wasn’t initially for the firing of Mr. Capps, it seems the public will never know,” he said.

Thomas said in the short time Capps was the town administrator, he was able to have a few conversations with him.

“I found him to be keenly intelligent, eager to solicit input from all in the community and dedicated to helping Murfreesboro find business opportunities in troubling times,” he said. “I know that I am not alone in this opinion as I have heard similar comments from older and highly respected members of this community.”

Thomas added in the time Capps was employed with the town did not seem long enough for a new hire to be critiqued. He asked if Capps was given a chance to correct the issues council felt were so egregious.

“And just why was an emergency session needed to address some seemingly benign transgressions when a regular meeting was scheduled just five days later,” questioned Thomas. “Did you consider how this rash action will crack our town’s reputation and influence our ability to attract quality candidates in the future.”

Thomas concluded, “I urge the council, rescind your vote from last Thursday, reinstate Mr. Capps to his position as town administrator–it’s the right and honorable…honorable course of action.”

Laurie Brook said she was there to express her extreme discontent about the dismissal of Capps.

“The public had no idea what the meeting was being called for, let alone be able to have a public forum in which to allow the Town Council to hear from the community,” she said. “Worse than that, there was no opportunity given to Mr. Capps, before that emergency meeting, or during the closed portion of that meeting to go in and defend his livelihood and any potential issues.”

She added she was here along with others to show their town council that they would not allow a couple of town council members to “sabotage” the future of the town.

“The process that certain council members have used to carry out personal vendettas to keep this town from becoming the prosperous and thriving town of years ago needs to end,” Brooks continued. “We are the voters here before you today.  We elected you, one marginally, to be our voice…the voice of the people of your community.”

She thanked the councilmen and councilwomen, and the Mayor, who fought for Capps.

“I am sorry that those same individuals, who appear to have been the majority, who did not want dismissal, were apparently subjected to bullying from more forceful council members,” she said. “I actually hope, and believe, that most of you regret that decision.”

She noted that the community needed progress, improvement and revitalization and Chowan University needed support from the community. Brooks added that Capps came with “tremendous experience and knowledge.”

She concluded by asking council members to reinstate Capps.

Trudy Gibson said she has never worked with Capps and therefore could only speak from her personal view point. Gibson recalled first meeting Capps who introduced himself while she was working in her garden.

“From the conversation that pursued, I felt he was a kind, considerate and sincere person,” she said. “Since that time I’ve seen him all over town and each time he takes a moment to speak and ask about my well being. He is interested in people.”

Gibson continued that she was old enough to have “plenty of hindsight” and had seen where people had taken over a new job and just as they start there is a change in position. In the long run, she said, it ended up disastrous.

She said she believes Capps has already sized up the needs in town and has the best interest of Murfreesboro at heart.

“Is three months really a fair amount of time for any one to oil the wheels of progress and get needed changes underway,” she asked.

“I believe it would be a grave mistake to make a change at this time,” she said.

Herbert Eley supported the reinstatement of Capps as well.

Eley said he had just begun to work with Capps on a grant to expand Diamond City Produce and that Capps had kept, in a timely fashion, his appointments until last Thursday.

“The next morning, Friday, September 10, when I walked through the door to deliver the proposal to expand Diamond City Produce, I was told Mr. Capps was no longer with the town of Murfreesboro,” he said.

Eley was surprised by the decision and attributed to people disliking him.

“After hearing whispers from very reliable sources, I am severely dismayed that an embodiment of hatred which surrounds me for all the wrong reasons have lashed out and victimized an innocent bystander,” he said.

Eley said he was an artist that was misunderstood “by the self-righteous, self serving and wannabe conservative upper echelon of the local, regional and state political, financial government and civic institutions.”

Eley said he chose to come back to Murfreesboro, his hometown, because he saw an opportunity to enrich the area, empower the people, create jobs and opportunities for youth through arts and recreation.

“Every stop along the way, I have been encumbered by individuals like minded of those on this council and members of this council,” he said.

Eley appealed to the council that a closer examination of the proceeding was needed, that he stood in support of Capps and questioned that perhaps Capps’ job performance should not be the only one under scrutiny.

“Perhaps, it is you all and your motives that need to be more closely examined as to why you have rendered this egregiously misguided and swift final decision,” he concluded.

Hinton asked the crowd if there were any other comments.

Jennifer Moore asked if the meeting on Thursday was an emergency.

Town Attorney Buddy Jones responded it was for a special meeting.

Moore said she was aware it was a special meeting, but was it an emergency.

“A special emergency meeting,” he responded.

“What was the emergency?” she said.

Jen Hodges asked if the meeting was a special meeting if the media was contacted.

Jones said all media was contacted.

The Roanoke-Chowan News-Herald did not receive a fax about the meeting, though Town Clerk Joleatha Chestnutt did later provide proof the fax was sent.

The council met in closed session for more than an hour and a half. Once reconvening in open session, Eubank moved to recess the meeting until 9 a.m. on Tuesday, September 21. Councilman Billy Theodorakis offered a second and the motion passed with no objection.

The world according to Clint

With dove season already here and deer season not too far behind, it got me thinking about all the recent... read more