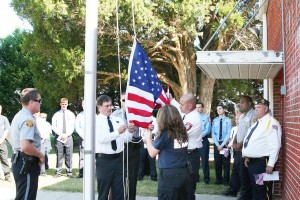 Members of the Murfreesboro Fire Department and Hertford County Emergency Services join to raise a flag on Saturday at the fire house, part of a 9-11 tribute staged by Woodmen of the World Lodge #862. Photo by Amanda VanDerBroek

MURFREESBORO — On the morning of September 11, 2001 not everyone fled from the flames and smoke pouring out of the crumbling buildings in New York and Washington D.C. and the ground near Shanksville, Pa. Some ran towards the chaos in hope of saving lives.

As much as September 11th has become a day to remember the nearly 3,000 people who perished in a cold and calculated series of terrorist attacks, it has also become a day to honor the rescue personnel who paid the ultimate price and salute those who continue to save lives.

Held in front of the Murfreesboro Fire Department on Sycamore Street, the ceremony featured music performed by Chris Jernigan and Rebecca Parish, prayer offered by Rev. Wint Hale Jr. and the dedication of a new flag pole in the front of the building.

Murfreesboro Mayor John Hinton said September 11th was to remember the 2,976 who died, especially the public servants who fulfill their obligation to protect and serve.

“Here in Murfreesboro we have those who everyday place their lives on the line,” he said. “May God bless you in your continued effort.”

“Nine years ago, we experienced horrors that we never thought could occur in this land of freedom and opportunity.  Thousands of American citizens and those of other countries lost their lives in the terrorist attacks in New York, Washington, D.C. and Pennsylvania,” said Nelson. “Hundreds of heroes rose up during and after those attacks, and it is to them, and to those fighting to strengthen our freedom, that we dedicate this ceremony.”

In a later interview, Cooke thanked WOW Lodge 862 for the new flag pole and the ceremony. While communities across the country rely on local rescue personnel, Bryant said volunteer fire and rescue entities like the Murfreesboro Fire Department depend on the community they serve.

“If it wasn’t for the support of the community we couldn’t make it,” he said.

Since 2002, Woodmen of the World lodges across the country have been dedicating flagpoles and presenting flags not only to honor the heroes and victims of September 11, 2001, but also the men and women of our Armed Forces serving in combat. According to Nelson, nearly 4,000 flagpoles have been dedicated to these individuals during Woodmen of the World’s “In Honor and Remembrance” ceremonies.