The Falcons’ first-year skipper got his inaugural win at the helm of the proud Falcon football program when Bertie defeated Northampton County High School – East 20-14, but it came just hours after his brother, Reginald Watford, passed away. 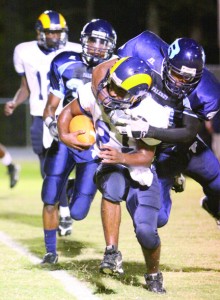 “It was tough,” Watford said of losing his older brother. “He taught me so much. As hard as it was, I still just couldn’t leave my guys. I couldn’t leave these kids.

“It was so unexpected that I’m still kind of speechless,” the coach said. “It took me a while to get my bearings on the sidelines, but I have to give so much credit to Coach (Mike) Dail and Coach (Grantley) Mizelle and all the guys. They had everything organized and ready.”

Despite ending up with the victory, the Falcons had to rally from an early deficit to defeat the Rams at Roy L. Bond Jr. Stadium.

Northampton-East got on the board first when senior defensive lineman Thornton Mitchell scooped up a Bertie fumble and rumbled 57 yards to paydirt with 1:51 to play in the first quarter. Terrance Eason reached the endzone on the two-point conversion and the Rams jumped out to an early 8-0 lead.

The Falcons came right back, however, thanks to a 28-yard return by Jonathan Wilson on the ensuing kickoff. Wilson’s return gave the Falcons possession at the Northampton-East 47-yardline.

On the next play, senior Corbin Rascoe fumbled the exchange from quarterback Malcom Cherry, but gathered in the pigskin, broke four tackles and rolled all the way to the endzone. Wilson added the PAT leaving East ahead 8-7 with 1:25 remaining in the first quarter.

The Falcons claimed the lead for good on their next drive. After taking over on their own 37-yardline, the Falcons put together an 11-play, 63-yard drive to reach paydirt.

The Falcons got two key first down pickups from Rascoe on the drive and then Cherry used his legs on a busted play to pick up a huge 23-yard gain. On the next play, Cherry ran the option and made a timely pitch to Darius Moody who went down the sideline and just inside the pylon for the score.

The Falcons added another score after stopping Northampton-East on downs at the 32-yardline. The next play saw Cherry pick up 13 yards before flipping the ball to Moody who raced into the endzone. The toss was a forward lateral, however, and the score was nullified.

Rascoe was caught in the backfield on the next play, but reversed field and picked up 24 yards down to the Rams’ 36-yardline. Three plays later, Rascoe carried it in from the seven yardline and Bertie led 20-7 with 47 ticks left on the second quarter clock.

Twice in the third quarter, Bertie had solid drives only to turn the ball over by way of a fumble. Northampton-East didn’t fare any better as they lost the ball on downs once and on an interception the second time.

The Rams, however, finally got their offense going early in the fourth quarter when they capitalized on a Bertie turnover by marching 37 yards on six plays.

Je’Wuan Boone finished the drive with a 10-yard scamper to paydirt with 10:20 to play in the fourth quarter. The two-point conversion failed and Bertie held on to a 20-14 lead.

The Falcons took the ensuing possession and drove inside the Northampton-East 10-yardline, but again fumbled the ball way.

Northampton-East was forced to punt, but stopped the Falcons and got the ball back with 1:29 to play at their own 20-yardline.

On the second play from scrimmage, however, Bertie cornerback Pashon Cherry stepped in front of a Lashawn Pitman aerial and ended the drive.

From there, Bertie was able to run out the clock and secure the win.

“We’re getting better,” Watford said. “We still have a ways to go, but we’re improving each week. Our defense is still playing well, we just have to stop scoring for the other team.”

The win boosts Bertie’s overall record to 1-3 while dropping the Rams to 0-4 for the season. Next week, Bertie is on the road at South Central while Northampton-East will look for that elusive first win when they host Currituck at Roy F. Lowry Stadium.