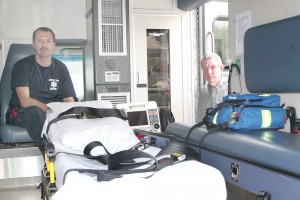 That effort took a huge step forward approximately 30 days ago when the department moved to 24 hours a day service seven days a week as an Advanced Life Support (ALS) unit.

“We felt like we had to do something,” Colerain EMS Chief Duncan Hughes said. “We had volunteers, and we still do, but we wanted to provide the best possible care for citizens and ALS was our best option.”

Now the squad provides one paid EMT-I (Emergency Medical Technician – Intermediate) and one paid EMT – Basic during daytime hours and a paid EMT-I and a volunteer EMT- Basic at night.

As an ALS department, Colerain will now be able to offer services it couldn’t before. Those services include the administration of medicines and starting IV’s.

“The bottom line is early intervention,” Hughes said. “The quicker we can get to a patient and provide what they need, the better for the patient.”

Stephen Allen is one of the EMT-Is who now works with Colerain EMS. He said he was happy the service area was getting better care.

“Bertie County is so large land mass wise that distance is an issue,” Allen said. “The earlier and the more advanced the intervention you provide, the better the outcome.

“It’s always bothered me that you had to live in a populous area to get better care,” he said. “Living in Windsor should not mean you have a higher level of care than everywhere else in the county. Now that care will be available here in a timely manner.”

Hughes explained that if Colerain EMS previously went out on a call that required intermediate care, a call would have to be made for an interception by the Bertie Rescue Squad.

Allen said Colerain would be dispatched and arrive in eight minutes. After a four-minute evaluation, they would find out they needed an ALS unit and then it would take another 12 minutes for the intercept.

“At this point 20 to 30 minutes have elapsed before the patient received the care they needed,” Allen said. “Now it will be cut from a 30-minute window to four to seven minutes. The biggest thing is the time factor. Time is critical with certain conditions we deal with.”

Another EMT-I at Colerain, Wendy Swain, said moving to ALS could mean a huge difference with heart patients.

“When you have a chest pain call, as with any other situation, ‘time is muscle’,” she said. “Being able to start an IV, give nitro and give fluids if needed can really make a difference.

“If a squad is an ALS squad, care can start immediately,” she added. “There is no delay waiting on an ALS intercept from the nearest unit or getting the patient to the ER.”

Hughes said the step up to ALS was a significant one for Colerain.

“It’s a big step for us, but the whole issue is providing better patient care,” he stressed.

Hughes said the payroll of the squad doubles in moving to ALS, but the unit decided it was worth it. That cost will be made up by the ability to charge for the new services and by fundraisers.

“We’re going to have to have some help,” he said.

The chief said Lewiston Rescue may soon move to ALS as well, which would give the county total ALS coverage. At that time the squads hope to receive a larger contribution from Bertie County to help provide the service.

“There are good people here,” Allen said. “There will be growing pains, but it will be an overall smooth transition.”

“We couldn’t have done it without their assistance,” he said.