Clark resigns from Woodland board

WOODLAND – The town’s Mayor Pro-Tem here has tendered his letter of resignation from the board. 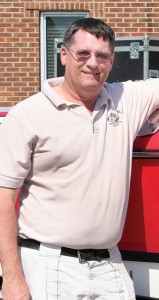 Clark, who is Vice President of Fineline Industries, has been the local person responsible for Fineline-East which is located in Woodland. At the end of the month, Fineline will suspend operations in Woodland because of current economic conditions.

While intending to reopen the plant, Clark said it would be necessary for him to spend time at the company’s Merced, California operation.

“We will remain residents of Woodland,” he said in his letter of resignation. “However, we will be spending a large amount of time at the Merced plant. This will prevent me from being able to perform my duties as a member of the Board.”

Clark said he was pleased with the time he was able to serve on the board and would continue to help the town in any way possible.

“I have enjoyed my time on the Board and hope that I have been of benefit to the citizens of Woodland in the past years,” he wrote. “If there is anything I can do to help, please feel free to contact me.”

“I certainly understand and respect the decision Les has made to step down while he’ll be spending so much time on the west coast,” Jenkins said. “At the same time, it’s certainly a big loss to the town of Woodland. Les has been a dedicated member of the board who has served the town well. The town of Woodland will miss his presence.”

This marks the second time the Woodland Board of Commissioners has had to fill an unexpired term. Commissioner Joe Blythe passed away in February and was subsequently replaced by Sidney Joyner.

Jenkins said the board discussed following a similar procedure as they look for a new commissioner this time.

“I told the board we would operate similarly to when Commissioner Joe Blythe passed away,” Jenkins said. “We’ll each bring back the names of some people who are interested in serving their community and proceed from that point.”

The mayor said he did not know how long it would take, but he did know the board would not rush into any decision.

“As important as it is to have a full board, we won’t rush into any decisions,” he said. “We want to make sure we find the best person for the town.”

Jenkins said he will seek advice from the North Carolina League of Municipalities as to how to fill the position of Mayor Pro-Tem for the town.