GATESVILLE – John W. Lambert III and Jessica H. Vesely were united in marriage on Saturday Aug. 14 at the Upper Room Assembly of God in Gatesville. Pastor Eric J. Earhart presided over the ceremony.

The bride is the daughter of James P. Vesely of Chesapeake, Va.  The groom is the son of John W. and Debra L. Lambert, Jr. of Eure. 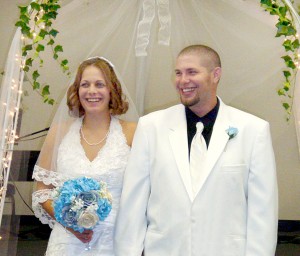 Bridesmaids were Emily Truman of Gates and Debra Lambert.

Groomsmen were Greg Noble of Elizabeth City, Jason Lambert (brother of the groom) of Eure and John Lambert Jr.

Flower girls were Allysia C. Lambert (daughter of the groom) and Mandi Earhart.

Diane Black of Norfolk, VA was the Mistress of Ceremonies.

Bridal showers were given by Diane Black, Michelle Black and Esther Chauncey, and the Women’s Ministry of the Upper Room Assembly of God.

The couple will reside in Eure.

Tommy Lee White Jr. and April Boone, both of Ahoskie, announce their engagement. Parents of the bride-elect are Ashby and... read more