The bride is the daughter of Dianne and Buddy Creel of Conway. She is the granddaughter of Edith and Bobsie Drewette and Elizabeth A. Creel and the late Marvin Creel, all of Seaboard. 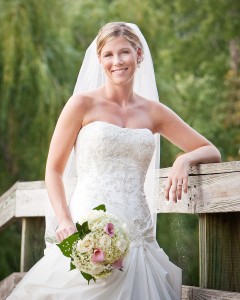 The Reverend Keith Thomason of Roanoke Rapids performed the nuptial ceremony.  Wedding music was provided by Betty Ann Long of Seaboard, pianist, and soloist Debbie Williams of Plymouth, cousin of the groom.

Given in marriage by her parents and escorted by her father, the bride wore an ivory luxe taffeta strapless Casablanca gown.  The gown was accented with gold embellishments. The bodice of the gown featured a sweetheart neckline radiantly ornamented with intricate pearl and beaded appliqués. A gathered asymmetrical dropped waistline leads to pickups on the back of the gown decorated with a heavily embroidered inset that flows into a scalloped chapel length train. For her headpiece the bride chose an ivory one tier allusion cathedral length veil. She carried a hand-tied bouquet of green hydrangeas, white roses and calla lilies.

Danielle Creel of Conway, twin sister of the bride, served as maid of honor. Bridesmaids were Lisa Flythe of Garysburg, Lou Flythe and Mindy Drewette of Jackson, all cousins of the bride, Amanda Dixon of Conway, friend and college roommate of the bride, and Heather Hooks of Wilmington, college friend of the bride.

Honorary bridesmaids and program attendants were Lauren and Hannah Drewette of Jackson, cousins of the bride.

Kiersten Flythe of Conway, friend of the bride, served as flower girl. Ring bearer was Nicholas Drewette of Jackson, cousin of the bride.

Cumin Brittenham of Aulander served as his son’s best man. Groomsmen were Justin Brittenham and Josh Brittenham, both of Greenville, brothers of the groom, Harrison Pinnix of Severn, Timmy Dixon of Conway, Billy Helms of Murfreesboro and Jamie King of Union, all of friends of the groom.

Norma Jo Drewette of Jackson, aunt of the bride, served as mistress of ceremonies. Lauren Griffin of Greenville, friend of the bride and groom, served as guest book attendant.

The bride is 2006 graduate from East Carolina University with a bachelor of science degree in Biology and a 2010 graduate from Campbell University College of Pharmacy and Health Sciences with a doctorate in Pharmacy. The groom is a 1999 graduate of Ridgecroft High School and a 2001 graduate from Wilson Technical Community College Fire and Rescue Academy.  He is currently employed with the Chesapeake Fire Department in Chesapeake, Virginia.

After a honeymoon trip to Myrtle Beach, SC, the couple will reside in Murfreesboro.

A reception was held following the ceremony at Chockoyotte County Club in Weldon hosted by the bride’s parents.  Guests were greeted by Jennifer Ray Perry, friend of the bride and groom.

An after-rehearsal dinner was hosted by the groom’s parents at Whitley’s Barbecue in Murfreesboro.

A “Honeymoon Money Tree Party” was held on June 25 hosted by family and friends at the home of Mark McGee in Margarettsville.

A bachelorette weekend and lingerie shower took place on June 18-20 in Nags Head.

On July 9, a bridesmaid’s luncheon was held at Mt. Carmel Baptist Church where the bride presented gifts to the bridal party.  This was hosted by Norma Jo Drewette, Sandra Flythe and Jeneane Drewette, all aunts of the bride.

GATESVILLE – John W. Lambert III and Jessica H. Vesely were united in marriage on Saturday Aug. 14 at the... read more