Butterfield questioned over misuse of funds

U.S. Rep. G.K. Butterfield, D-N.C., of Wilson reportedly was one of six members of Congress — Democrats and Republicans — questioned over the alleged misuse of travel funds, according to The Wall Street Journal.

A congressional investigation centers on the members’ spending of leftover per-diem pay, the newspaper reported. 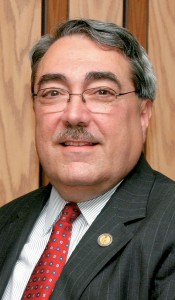 Butterfield has acknowledged keeping some of the travel money, according to the newspaper.

A call seeking comment from Butterfield was not immediately returned Tuesday afternoon.

Statewide political watchdog Joe Sinsheimer read the WSJ report. He indicated the per-diem issue represents part of the culture in the nation’s capital.

“I think the travel per diem is an area that Congress has needed to clean up for a long time, and I hope the investigation into Congressman Butterfield’s behavior and others leads to much clearer rules and much tighter controls over that money,” Sinsheimer told the Washington Daily News.

He said it is unlikely the issue would result in congressional hearings or sanctions, but lawmakers probably would look at those cases and try to craft new rules governing per-diem pay.

Figures weren’t obtainable at once Tuesday.

“It’s a sign of the arrogance of the institution,” Sinsheimer commented. “In any other industry, people turn in their travel receipts and they get reimbursed to the penny, but in Congress you’re just given a lump sum and there is no accounting.”

This latest report comes on the heels of criticism leveled at Butterfield by his Republican opponent, Ashley Woolard of Washington.

Woolard, in a press release issued Tuesday night, called on Butterfield to resign in light of the allegations that the Congressman had pocketed expense-related cash advances for overseas congressional junkets.

“I was disappointed to learn that Congressman Butterfield has admitted pocketing unspent cash advances from his congressional junkets and now is the subject of a federal investigation.” Woolard said in the press release. “Former First District Congressman Frank Balance was convicted and sent to federal prison for laundering taxpayer monies into his pocket and we now see GK Butterfield is just more of the same.”

Woolard continued, “This is a disgrace. Citizens of the First District need honest leadership that will help our struggling economy, not another greedy politician feeding at the public trough as our economy burns.”

In late July, Woolard held a series of news conferences in which he accused the incumbent of taking “a political bribe” from U.S. Rep. Charlie Rangel, D-N.Y.

Woolard demanded that Butterfield return $4,000 given to his campaign by the National Leadership Political Action Committee affiliated with Rangel.

Woolard questioned whether Butterfield could fairly participate in a trial of Rangel by the House ethics committee on which he (Butterfield) serves. Congressman Rangel is scheduled to go to trial this month.

Woolard has also called on the Justice Department to open a criminal investigation of Butterfield’s involvement in the Rangel affair.

“Like most people here in eastern North Carolina, I grew up with — people I work with, people I go to church with — we know this is wrong,” Woolard said Tuesday.

Early this month, Woolard called on the U.S. Department of Justice to look into Butterfield’s activities, and he renewed that call Tuesday.

“It’s just a continued pattern by G.K. Butterfield,” he said.

(Jonathan Clayborne is a Staff Writer for the Washington, NC Daily News, a sister publication of the Roanoke-Chowan News-Herald.)

Howard Hunter III (second from left) was sworn in on Saturday as Second Vice-President of the North Carolina County Commissioners... read more