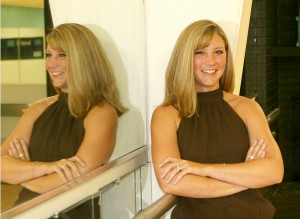 Chelsea Davis Jernigan “reflects” on her future as the owner of Progressions Dance Center in Roanoke Rapids. Photo by Thadd White

ROANOKE RAPIDS – She’s been a student all her life.

Now Chelsea Davis Jernigan, a native of Seaboard, is moving to the next stage of her life – as a teacher.

“I’m excited to get started and share my love for dance,” Jernigan said. “We have a full slate of classes and already are almost maxed out with students, so it’s an exciting time.”

Jernigan certainly has the credentials to teach dance. She has been a student since she was two years old and has earned a college degree while continuing to dance as an adult.

She started by taking lessons at the Myrick School of Dance when she was a youngster and has studied under Margie Myrick, Jeane Newsome, John Davis and Heather Merritt.

During her studies, Jernigan has danced jazz, tap, ballet/lyrical, modern and clogging. She will be offering students in the Progressions Dance Center those same alternatives.

“I always loved dance, but I started taking it more seriously when I was in high school,” Jernigan said.

After becoming a member of the dance competition team at Myrick at the age of 11, Jernigan said she really began to enjoy dance more.

“Being on teams competitively pushes you harder,” she said. “You have to be more serious about it or you don’t make it on those teams.”

A high school athlete at Northeast Academy, Jernigan left the softball field in ninth grade to concentrate more on her dance competition. While continuing to play tennis all four years, most of her work was spent in the dance studio.

Following her graduation from Northeast, Jernigan went to Meredith College where she earned a degree in Dance Education, received her teaching certification for grades K-12 and continued to dance.

While at Meredith, Jernigan was a member of the Meredith Dance Theater, Meredith Tap Ensemble and was inducted into the Nu Delta Alpha Dance Honor Society.

She also danced with the Raleigh-based Second String Cloggers, including appearances at the North Carolina State Fair.

Last summer, Jernigan decided she would return home to her native area and open a dance studio in Roanoke Rapids. While fielding several other offers, Jernigan said coming home was never in doubt.

“I’m proud of where I’m from,” she said. “I love Northampton and Halifax counties and feel like this was the perfect place to grow up. I wanted to come home and offer other children the same opportunities I had in dance.”

After searching throughout the city, Jernigan settled on her current location on East 10th Street and began the work of transforming a building that housed a cheeseburger diner and pizza parlor into a modern dance studio.

“It certainly has been a lot of work, but I’ve enjoyed it and I’ve had a tremendous amount of help, for which I am very grateful,” she said.

Work continued throughout the last year, but began in earnest during the month of May. It will soon be completed, however, as Progressions Dance Center will host an open house from 9 a.m. until 12 noon on Saturday, Aug. 28.

Classes will begin on September 6 and continue through May when the Center will have its first season of recitals scheduled for The Centre at Halifax Community College.

The new facility offers a large dance floor on which Jernigan will teach those from age two to adult. A full schedule of classes will be available Monday through Friday including a Mommy and Me class for two-year-olds which is slated for 11 a.m. Tuesdays and Thursdays and one at 3:30 p.m. on Thursdays.

Other classes will include Combo classes for those ages three to 12, broken down by age groups, as well as classes for tap, jazz and clogging. Many of the classes have already reached capacity, but interested parents or students can check the Center’s website (http://progressionsdancecenter.com) for availability.

Jernigan is married to Thomas Jernigan and the two reside in Halifax. She is the daughter of Joey and Debbie Davis of Seaboard.

She credited her family and many others with helping her during the opening of the studio.

“I am appreciative for everyone who helped me achieve this dream, especially my grandfather (John Mitchell), who was so instrumental,” Jernigan said.

The new studio will open September 6.