CREEKSVILLE – It was déjà vu all over again.

Northampton-East rallied for the second straight week, but again came up just short.

A week after falling to Edenton 21-20, the Rams dropped a 30-28 overtime decision to visiting Perquimans here last night (Friday) when they came up short on a two-point conversion.

The Pirates scored early and held a 22-6 halftime lead, but Northampton wasn’t done. The Rams roared back for two second-half touchdowns and sent the game into an extra session.

Northampton-East went on offense to start the overtime period and used just three plays to score. Je’Wuan Boone picked up two  yards on first down and added six more on second to give the Rams possession at the two-yardline.

There, quarterback Lashawn Pitman picked up his own fumble and rolled into the endzone to give East a 28-22 lead. The conversion run, however, was stopped when Boone was pulled down at the one yardline.

Perquimans then took over at the 10-yardline for their opportunity in the extra session.

On the first down play, Northampton’s Kyshawn Gaskins pulled down Reshawn Staten at the line of scrimmage. Staten picked up seven yards on second down and one on third down setting the stage for the fourth down play.

Pirate quarterback Cody Saunders went over right tackle on the fourth down play to score and then did the same on the conversion to send Perquimans to victory.

The ending, however, was not the only measure of the game.

Northampton-East rallied from a two-score deficit in the fourth quarter to get the game into the overtime session.

The first scoring drive came after the Rams’ defense forced a three-and-out on Perquimans’ first series.

East junior Evans Grant returned the punt 65 yards for a touchdown, but the score was called back when a teammate was flagged for illegal use of the hands. 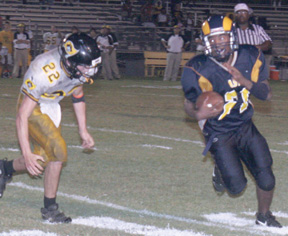 Je'Waun Boone turns the corner during overtime Friday at Northampton-East.

The Rams then set up shop at the Perquimans 45-yardline.

Del’vonte Bottoms picked up three yards on the first down carry followed by pickups of one and two yards by Pitman. A penalty against Perquimans gave the Rams the first down at the 34-yardline.

Boone picked up seven yards on the next play followed by a two-yard plunge from Bottoms. Those runs set up a 25-yard scamper to paydirt by Boone. Pitman then connected with Jamar Williams on the conversion pass and East was within 22-14.

After kicking off, the Rams forced another three-and-out by the Pirates. This time on fourth down, the snap sailed wide and punter Kris Vanhise was forced to fall on the ball at the 28-yardline.

Boone picked up 13 yards on the first carry from scrimmage and a penalty moved the football back to the 20-yardline. Another Boone carry garnered negligible yardage before Pitman tried to connect with Saquan Hendricks.

The pass fell incomplete, but Perquimans was flagged twice – once for pass interference and again for unsportsmanlike conduct. The result of the two penalties was  first down for Northampton-East at the four-yardline.

It took just two plays before Gaskins found paydirt at the 11:56 mark of the fourth quarter. On the conversion, Pitman found Travis Wiggins for a score and tied the game at 22-all.

Each team had opportunities to pull out the win in the fourth quarter, but came up short.

In the early going, Perquimans was the first to find the endzone.

Josh Konczal recovered a Northampton-East fumble on the Rams first drive and gave his team the football at the East 35-yardline. It took Perquimans just five plays to reach paydirt.

The big play came on a 32-yard pass completion from Saunders to Mikel Harvey. Saunders and Harvey hooked up again on an eight-yard scoring pass three plays later.

A.J. Felton added the conversion run and Perquimans led 8-0 with 7:42 still to play in the first quarter.

The Rams were unable to answer until midway through the second quarter when Hyshawn Hewitt picked up a Perquimans fumble to give the Rams the ball at the Pirates 48-yardline.

Pitman picked up five yards on first down and Hewitt added two on second setting up third-and-three. On the third down play, Boone turned the left corner and scampered 41 yards to paydirt. The conversion run failed and Perquimans held on to an 8-6 lead.

The Pirates answered on the next drive, going 47 yards on six plays capped by a Staten three-yard run. The pass failed, but Perquimans led 14-6 with 5:03 to play in the first half.

Northampton-East fumbled the ensuing kickoff and the Pirates recovered, taking possession at the Rams’ 36-yardline. It took just four plays before Saunders punched it in from two yards out. Saunders and Harvey connected on the two-point conversion and Perquimans led 22-6 with 4:08 to play.

The loss drops the Rams to 0-2 for the season heading into next week’s showdown with Northampton County High School – West. Perquimans improved to 1-1 with the victory.