MURFREESBORO – With a grand ceremony and ribbon-cutting, Chowan University officially opened the doors to the School of Graduate Studies on the first day of their Master’s Degree classes on August 24. 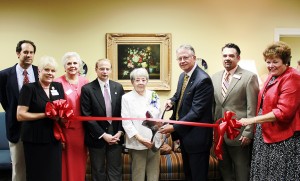 As a special guest, Gwendoyln Phelps of Tarboro was in attendance as Chowan President Chris White officially unveiled the suite named in her family’s honor for the generous donation that made this ground-breaking milestone possible.

“This fine new addition is dedicated to [Mrs. Phelps’] late husband, William, and from this day forth, will be known as the Ward-Phelps Suite,” said Dr. White proudly as he presented Mrs. Phelps with a beautiful framed print of Chowan’s historic Columns building illuminated at night. “Mr. Phelps, himself a self-taught genius, knew the vast importance of a college education and made sure all four of their children went on to graduate with college degrees.”

Mrs. Phelps, who was accompanied by three of their four children among countless other family and friends, some of which had traveled from as far as Colorado, mentioned the love for church and education and the great combination of the two that can only be found at Chowan University.

“My whole life was reared with education and church foremost in our hearts and minds,” explained Phelps, a Chowan alum from the Class of 1942. “Both mean a lot to me and my family.”

Murfreesboro Chamber of Commerce members and a large turnout from the Chowan community were also present for the ribbon cutting ceremony. Also in attendance as they were starting off their new classes were 33 area teachers enrolled in the two-year Elementary Education Master’s Degree program, fulfilling and surpassing Chowan’s graduate school enrollment goals.

For more information on Chowan University’s new School of Graduate Studies and its Masters in Elementary Education Degree, contact Dr. Brenda Tinkham at tinkhb@chowan.edu or call (252) 398-6304.

Seven-year-old Mike Harrington Jr. is shown with his mother, Wendy, and Columbus Pike, the man whose life was saved by... read more