MURFREESBORO – If third-year Chowan University football coach Tim Place had a motto for his 2010 squad it might be Penn State coaching great Joe Paterno’s famous words: “You have to perform at a consistently higher level than others”.

Place will be seeking those two things from a squad that finished 2-8 a season ago: a higher level of performance and doing it consistently. 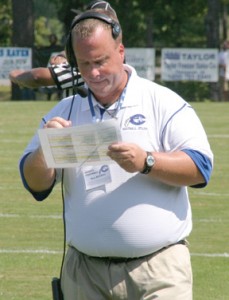 And all of this after losing last season’s Central Intercollegiate Athletic Association “Player of the Year”, quarterback C.J. Westler, to graduation.

The Hawks begin the 2010 campaign Saturday against the Lenoir-Rhyne Bears in a 7 p.m. kickoff from Moretz Stadium in Hickory.

The Bears are coming off a 5-6 mark in ’09 under fourth-year coach Fred Goldsmith and are picked to finish sixth in the eight-team South Atlantic Conference. Chowan will be playing its first season in the revamped CIAA North Division and are picked for ninth in the 13-team league.

“It’s exciting,” said Place in a telephone interview earlier this week. “With any new season your stomach’s spinning and there’s some apprehension, but it’s also exciting because it’ll answer a lot of early questions, especially going against a quality opponent.”

One of those questions will be under center where Southwestern Junior College transfer Steven Carroll is expected to get the start.

“He’s got a chance to be really good,” said Place.  “C.J. had four years in our system going back to my time in Ohio, and while Saturday will be his (Carroll’s) first time in a Division-II game, he’s not young when it comes to football. In addition to his junior college experience he’s the son of a coach and he’s been around the game a long time.

“He’s had some great moments in early practices,” Place added, “and he’s still learning our system.”

One of Carroll’s targets this season will be sophomore wide receiver Robert Holland.  The 6-2 Newport News native is one of the top receivers in NCAA Division II.  Holland finished second in NCAA Division-II in receptions per game (8.6 rpg) and fifth in yards per game (107.8) last year.

One of his receiving mates will be junior Kevin Hodrick, who lead the Hawks with 10 touchdown receptions in 2009 and caught 49 passes for 612 yards.

“The two of them are as good as they want to be,” said Place. “I expect a big year from both and their production will be critical, but they also understand what’s needed for us to win.”

Eddie Coard is also back after missing the ’09 season.  In 2008, the Florida senior caught 56 passes for 697 yards and scored five touchdowns. He also averaged nearly 70 yards receiving per game in ten contests.

“I think he’s come back with more maturity,” said Place.  “He certainly has knowledge of our system and he was one of the top three receivers in the CIAA two years ago.”

Place is also proud of his backfield where returnees Ray Bradley (159 yards and 39.8 yds/gm) and Elliot Smalls (97 yards, 16.2 yds/gm and a touchdown) will be joined by Ryan Simpson and New Bern freshman J.R. Williams to shore up a ground game that was tenth in the league a year ago.

“I’m comfortable with our backs,” Place said. “We need our running game to help our new quarterback and the offense.”

Gone from the offensive line in All-CIAA performer and former Northampton-East star Melvin Rogers, but back for the new campaign are a core group led by Nick Watts and Charles Wright, both of whom had solid first years. Wright suffered a season-ending injury midway through the year in the Virginia Union game while Watts was named to the CIAA All-Rookie team.

Place will augment that pair with the likes of Jabari Coleman-Wilson, a 6’-4” 270-pound California native with speed.

“He’s as good as we’ve had,” said the coach, “but the entire O-line is a work in progress but we feel comfortable.”

Defensively, seven starters return led by senior Brad Cash who led the team in sacks (five) and tackles for loss (11.5) in ’09 and the Hawks will have Andrae DeWeese and Ethan Reedy to shore up the defensive front.

The linebacking corps is led by former Hertford County High star Leon Eason with his 23-plus tackles from a year ago and in the defensive backfield are heavy-hitters Brendon Scott and Marcus Johnson, who averaged nearly 70 tackles between them.

“Our defense has to be consistent this year,” said Place. “We have to be creative, get to the quarterback, and move people around.”

On special teams returnees Patrick Charles and Tony Goodman are back, but gone is kicker Cory Cline and his 10 field goals and 23 extra point kicks.

“Our special team guys are only as good as the guys up front,” says Place.  “We need them to execute and to help the offense with field position.”

Lenoir-Rhyne’s triple-option offense will be a huge challenge for Chowan’s defense according to the coach.

“For us,” he says, “we have to reduce turnovers and take care of the football.

“If we compete for 60 minutes,” he added, “I think we can get off to a decent and competitive season. We need to play ‘assignment football’ and if we do that then we can get things off to a good start and then keep it going in the right direction.”