MURFREESBORO – Jodi Clugston is coming into her own as coach of the Chowan University women’s soccer team.

Entering her third season at the helm, the former University of Virginia standout has her best recruiting class to date, some solid returning players and hopes of leading the Hawks back to a national tournament. 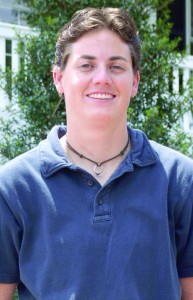 Jodi Clugston is preparing for her third season leading the Hawks.

“We had an excellent recruiting year bringing in seven freshmen and one transfer,” Clugston said. “Adding that to the players we have coming back and I feel good about where we are.”

Leading the returners for Chowan will be senior keeper Kristy Brown. Last season, Brown started 14 of 17 contests and stopped 155 shots on goal.  She also had three assists last season.

“We’re fortunate to have Kristy back for her fourth and final year,” Clugston said. “She graduated in three years, but is back to play her final season and that’s good for our team.”

Brown will be joined on the back line by defenders Lacy Crafton and Jillian Ferns. The two seniors will be linked to a pair of freshman to lead the Chowan defensive unit.

“Lacy and Jillian will  help us on the back line,” Clugston said. “It’s good to have that experience back there with two freshmen likely to start alongside them.”

Junior Katie Duncan will provide strength for the Hawks in the middle of the field while senior Jackie Stepp is expected to see action in a number of spots during the season.

“Katie will help anchor the middle for us,” Clugston said. “With Jackie, she will be expected to play anywhere and everywhere. She is a big benefit to the team with her positiveness and wiliness to give 100 percent on the practice field and in the games.”

Last season, Duncan was the third-leading scorer on the club with nine points including three goals and three assists.

The Hawks will also have the services of sophomore Chardanae Davis, who plays in the midfield for the club.

“Chardanae is fitter and technically better than last year,” Clugston said. “I expect her to get a lot of playing time.”

Also reporting in better shape technically is sophomore Alisha Terry, a forward who Clugston said is very fast and has potential to provide solid offense for the Hawks.

Chowan will, however, be without the services of Shauna Anderson, who was lost for the season due to a knee injury.

Defensively, the Hawks will count on Ashley Cimino (Virginia Beach) and Erica Wagnon (Leland) to get on the field early. Both have the confidence of their coach and are likely to start as freshmen.

Canesha Bradford is a midfielder who transferred to Chowan from Ferrum College. She is expected to contribute immediately as well.

Alaina Beasley, is a freshman forward from Indian River High School, and is expected to earn playing time this season for the Hawks.

Clugston said she was pleased the newcomers and returning players were coming together well as a unit.

“They’re blending so well together both on and off the field,” she said. “They get together for dinner even after three practices in a day.”

“I think with the tough schedule we have early, staying positive is going to be important,” Clugston said. “We have to stay positive and work hard on the practice field and on the game field.

“Our early schedule is tough and we have several freshmen who are going to be getting their feet wet in the college game,” she said. “How we handle that will be key to our season.”

As they prepare for the 2010 season, the Hawks are without their top two scorers from a year ago in Ashley Bradford and Clara Danzeisen, both of whom have graduated. Danzeisen was also the team leader in assists.

Despite losing those top players, however, Clugston said she believes the Hawks can improve on last year’s 5-12 record.

“One of our goals is to improve on our record from last year,” she said. “We are also hosting the NCCAA (National Christian College Athletic Association) South Region tournament and we want to win that.

“We have the opportunity to put together a good season and win the tournament and that’s what we’re working towards,” Clugston said.

The third-year coach and her team will continue to prepare for the next two weeks as they prepare for a 4 p.m. start with Wingate on September 10.