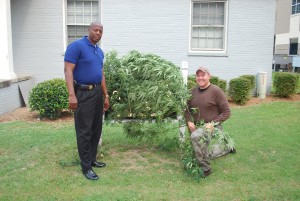 COLERAIN – Tips from citizens continue to aid the battle to get drugs off the streets in Bertie County.

Sheriff Holley sent Deputy Daniel Flores to the scene along with Officer Style of ALE to keep surveillance on the marijuana because it appeared to be well taken care of.

“At approximately 7:20 a.m., the suspect came out with what appeared to be two bottles of water and began watering the plants and clipping the leaves,” Sheriff Holley said. “At that time he was placed under arrest.”

The officers arrested William Carlton Watford, 61, of Sally Freeman Road. He was charged with manufacturing a schedule six controlled substance and possession of more than one and one-half ounces of marijuana.

Watford was placed in the Bertie-Martin Regional Jail under a $15,000 secured bond. His first court appearance is scheduled for tomorrow (Wednesday).

Sheriff Holley said he was happy with the continued support of the citizens in Bertie County.

“I cannot stress how instrumental the citizens have been in our efforts to stop the drug trade in Bertie County,” Sheriff Holley said. “I am happy they have been providing us the information and support we need to be successful.

“As always, I want our citizens to feel free to call the office, any of our officers and call me personally (724-1681),” he added. “Remember, we want your information, not your name.”

Home education on the rise

“Education begins at home” – that popular saying now holds more meaning than ever before. Education can occur without the... read more