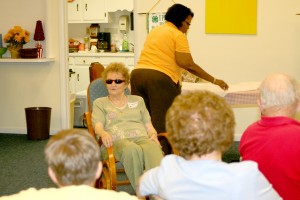 JACKSON — In their pledge 4-Hers vow to give their hands to a larger service.

Last week, the Northampton County 4-H Club did just that.

On Thursday and Friday, six 4-Hers partnered up with VIPs (visually impaired people) for a day camp filled with activities.

According to Northampton County Cooperative Extension 4-H Agent Caroline Brown, this year’s theme was “Back to the Good Ole Days,” which featured activities such as making homemade bread and butter, constructing rubber band boats and sharing stories of the past.

While making homemade butter by shaking a small plastic cup filled with heavy cream, Mary Gay of Galatia showed off her dance moves while listening to swing music.

Gay said she became visually impaired five years ago when the blood flow to her eyes was cut off during back surgery. She nearly went completely blind, but her visual impairment fails to slow the self described “ham” down.

Many of those trips include her fellow VIPs to places like Camp Dogwood near Lake Norman and an annual fishing trip. She has attended the 4-H VIP camp for the last three or four years and said she has enjoyed it.

“I think it takes a special person who would want to do this,” she said about the program. “Any activity is good for a visually impaired person.”

Gay was paired with Alissa Smiley, 17, of Seaboard. The teen said she was having a good time with her camp partner.

“I like (hearing about) stories of the olden days,” said Smiley.

She said that love of history stems from her family participating in historic demonstrations when she was younger. She noted her uncle, a Seaboard Lions Club member, suggested she participate in the camp.

“(It’s taught me) that even though a person might have vision problems they’re still the same as everyone else,” she said.

Thomas Chamblee, 17, of Cofield and Trey Taylor, 15, of Seaboard agreed. Both have participated in the camp for the last three to four years.

“It’s been fun,” said Chamblee. “You get to see what it’s like to be in their shoes.”

“You get to experience working with visually impaired people and learn about the obstacles they have to go through,” said Taylor. “It’s important because every one is the same.”

Larry DeBruhl of Roanoke Rapids, who lost his eyesight at age seven, said the tradition of the 4-H VIP camp goes back approximately 10 years.

DeBruhl worked as the Northampton and Halifax County social worker for the blind for 32 years. Soon after he retired, Kim McCall stepped into the role. DeBruhl, along with his wife, Gloria, coordinates many of the VIP trips.

While a social worker, DeBruhl assisted people in learning to live with their visual impairments. He applauded McCall for carrying on that work.

He noted many of those involved in the 4-H VIP Camp became visually impaired at a later age than him.

“It’s a change in lifestyle,” he said.

As for the 4-H VIP camp, DeBruhl said it’s good for the two groups to learn from each other.

“It’s been an ongoing argument as to who gets the most out of it,” he said. “It’s all about life and we’re all on the same road. Maybe some wisdom and life experiences will rub off on them.”