MURFREESBORO – It was almost like a day at the county fair.

Despite a threat of rain moving it indoors to the Helms Center, nothing dampened the spirit Thursday of Chowan University’s 3rd Annual Fall Sports Community Fun Night.

More than 100 locals, as well as some early-returning students came out for a ‘meet and greet’ with members of the University administration, the Hawks athletic department as well as team members of Chowan’s fall sports: football, volleyball, and men’s and women’s soccer.

“Moving things inside made it a little chaotic,” joked Senior Women’s Administrator and Deputy Athletic Director for Athletic Communications Meredith Long.  “We wish the weather could have co-operated a little more, but I’m very happy with the turnout.  It’s a lot of good support and we appreciate it.

“It’s a kind of open door for us to kind of give back to our community,” she added, “because they support us in more ways than one.” 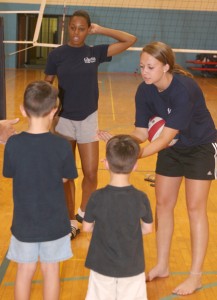 Members of the Chowan University Volleyball Team work with children during the Community Fun Night held in the Helms Center last week.

Youngsters had a chance to receive one-day clinic instruction and participate in drills in volleyball and soccer and to enjoy giveaways and face-painting.  For everyone there were hot dogs, chips, cookies, snacks and soda.

WDLZ 98.3 FM sports-talk host Gattis Hodges did a live-remote of his weekly “Talkin’ Sports” show from the lobby interviewing members of the various sports teams.

“This is a great event,” said CU’s Associate Athletic Director, Patrick Mashuda, smiling and sweating along with baseball coach Aaron Carroll over the hot-dog grill. “Each year it keeps growing and it’s a great kick off for the 2010 sports seasons.

“It’s nice to see all the community come out and support what we do here at Chowan,” he added.

While the teams were glad to get a break from practice, things begin for real starting later this week: The football team travels to Lenoir-Rhyne University on Saturday for a 7 p.m. season-opening game of their 10-game schedule. Their first home tilt is set for September 25 against Virginia State at Garrison Stadium.

The men’s soccer team will kick things off with their annual Alumni Match this Saturday on campus before hitting the road for Guilford College’s Tournament on Labor Day Weekend.  Their home opener is set for September 8 against Mt. Olive College.

The volleyball team will travel to the Fairmont State Falcon Fest in Pennsylvania that same weekend to open their season before beginning defense of their CIAA championship at home against St. Paul’s College on September 7.

The women’s soccer team begins their season at home September 10 when they host Wingate University.

But the focus Thursday was on conviviality.

“It’s a break for them (the athletes) because they’ve been going at pre-season pretty hard now,” said Long. “It gives them a chance to mingle with the community, talk to the media, supporters and fans so it’s a good time.”

Even the administration was on hand with an appearance by University president, Dr. Chris White, and Faculty Athletics Chairman, Dr. Larry Frazier.

“A good representation of the sports, a lot of faculty and staff and community folks,” said Frazier. “I think it’s a good cross section of what Chowan is all about: a lot of people with a lot of energy.

“I have two children here,” he added, “and to watch our students work with the younger kids shows you that these are young people growing up and that they’re going to make a positive contribution in the future.”

“I get to see some folks outside of the classroom setting in an informal, not really rigid way,” she said, “and I’m probably also seeing some who are going to be in sitting in my class as good students.”

Longtime athletic supporter, Larry Carter, was also on hand and can’t wait for the seasons to get underway.

“There’s right many Murfreesboro folks here,” he said, “and we really enjoy it.  Some of us who are retired are going to follow them not just at home games but on the road, too.”

“The biggest thing,” he said, “is showing them some of the love for the games we play and giving them the experience of seeing how we do it here at Chowan.”