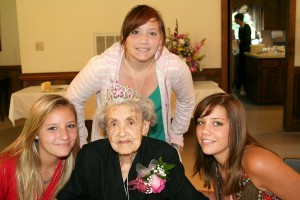 Florence Powell is surrounded by her granddaughters – from left, Brandi, Sam and Leslie Overby – as they pose for a photo at an August 15 event held at Rich Square Baptist Church in observance of her 100th birthday.

RICH SQUARE — Not many people can say they’ve seen a century of life.

One that can boast of a triple digit age is Rich Square native Florence Powell.

“All that stuff they told us about bacon is not true,” quipped Rich Square Baptist Church Pastor Bob Rogers. “Florence eats bacon every day for breakfast.”

Rogers, along with others, shared fond stories about Powell, a familiar face in town who could be found walking everywhere until a hip injury limited her mobility four years ago.

Mary Elizabeth Outland, who has known Powell for more than 40 years, describe her friend as funny and “a joy to be around.”

Powell’s daughter, Mary Powell Overby, said her mother had been anticipating the party all week long.

“She loves all of the attention,” she said. “She’s really been looking forward to this.”

Among the family members in attendance were Powell’s grandson and three great-granddaughters, Leslie, Brandi and Sam Overby.

A simple conversation with Powell will let one see that genuine personality all of those who know her speak of.

Born and raised in Rich Square, Powell graduated from Rich Square High School, where she was an active student playing on the basketball team. Powell said she has been a member of Rich Square Baptist Church since she was 13.

Earning a bachelor of science degree from Chowan College (now Chowan University), she was a seventh grade teacher at alma mater for two years, before she moved on to work at Peebles department store.

“I loved the children, but I didn’t like teaching,” she said.

At Peebles she was in charge of the ladies department and would travel to New York twice a year to pick up the latest fashions and bring them back to Rich Square. She worked at the store for 18 years.

Powell noted she lived in New Jersey for eight years during her married life. Her husband, Belan, died when she was 34 and they had one daughter, Mary Powell Overby, with whom she lives with in Raleigh. Overby said her mother’s home is in Rich Square and they visit frequently.

Powell credits her longevity to her family (her father lived until 91) and a little help from above.

“I attribute it to the Lord,” she said. “I’ve just led an ordinary life. I was given good parents with good genes.”

She continued, “I feel like I have an angel looking over me. There have been several incidents in my life that I could have been hurt, but for some reason someone has come to my rescue.”

WINDSOR – It wasn’t the opener the Falcons were hoping, but there were moments of brilliance here last night (Friday).... read more