WINDSOR – It wasn’t the opener the Falcons were hoping, but there were moments of brilliance here last night (Friday).

The Falcons trailed early and never could recover as they fell to 3-A power Rocky Mount High School 26-7 in the season-opener for both clubs at Roy L. Bond Jr. Stadium.

Rocky Mount took the early lead when they marched 79 yards on seven plays to take a 7-0 lead. Gryphon senior running back Darius Richardson started the drive with a 40-yard scamper that gave Rocky Mount a first down at the Bertie 39-yardline. 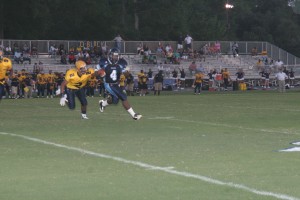 The Falcons trailed early and never could recover as they fell to 3-A power Rocky Mount High School 26-7 in the season-opener for both clubs at Roy L. Bond Jr. Stadium.

Following an incompletion, Nah’Jerrelle Graves rolled off 12 yards and two plays later he went nine yards to the 17.

A penalty moved Rocky Mount back to the 22-yardline, but Graves rolled off a 21-yard pickup to get the ball to the one. From there, Richardson capped the drive with a one-yard plunge. Fernando Alfaro added the PAT and Rocky Mount led 7-0.

Bertie seemed poised to respond quickly when senior running back Corbin Rascoe broke off a 22-yard gain on the first play from scrimmage to move the ball to the 45-yardline.

The Falcons continued to move down the field and a personal foul gave them the football at the six-yardline. The Falcons were unable to convert, however, and turned the ball over on downs at the eight.

Neither team was able to get anything going on their next possession and Rocky Mount ended an exchange with the ball at their own 31-yardline.Two plays gained them a total of two yards, but on third-and-eight, quarterback Diandre Harris connected with Miguel Valdez for a 67-yard scoring strike. The extra point failed, but Rocky Mount led 13-0.

The Falcons appeared ready to answer again, driving from their own 38-yardline all the way inside the red zone before turning the ball over on downs.

Rocky Mount picked up one first down on the next drive, but then was forced to punt and the clock ran out on Bertie’s last drive of the first half.

The Falcons again were on the move as the third quarter started.

Rascoe returned the opening kickoff 44 yards to the Gryphon 39. From there, the Falcons were able to pick up a pair of first downs – one off a four-yard Bowen run and another on a pass from quarterback Malcolm Cherry to Pashon Cherry.

As the drive was moving closer to the endzone, Alfaro picked up a Bertie fumble at the 24-yardline and raced 76 yards to paydirt. The two-point conversion failed, but Rocky Mount led 19-0.

The Falcons fumbled on the ensuing two possessions as well, the last of which resulted in a 15-yard, three-play drive for Rocky Mount that was capped by a 12-yard pass from Tevin Taylor to Damien Strickland.

The Falcons drove inside the Gryphon 30-yardline again on the next series, but again lost a fumble.

After forcing Rocky Mount to punt, the Falcons lost their fifth fumble of the night and the Grypons recovered at the Falcon 30-yardline.

With only a minute to play, Rocky Mount mentor Dickie Schock chose to run a sweep rather than kneeling on the football and the decision proved to be a costly one.

The Falcons forced a fumble on the play and Pashon Cherry picked up the loose pigskin and returned it 56 yards for the score ending the bid for a shutout. Jonathan Wilson booted the extra point through the uprights and closed the scoring with Bertie falling 26-7.

The Falcons (0-1) will face arch rival Hertford County High School Friday night in a non-conference affair. That will take place in Ahoskie.

WINDSOR – The trial of a Lewiston-Woodville man, accused of animal cruelty, was over before reaching a jury. Stephen Kyprianides... read more