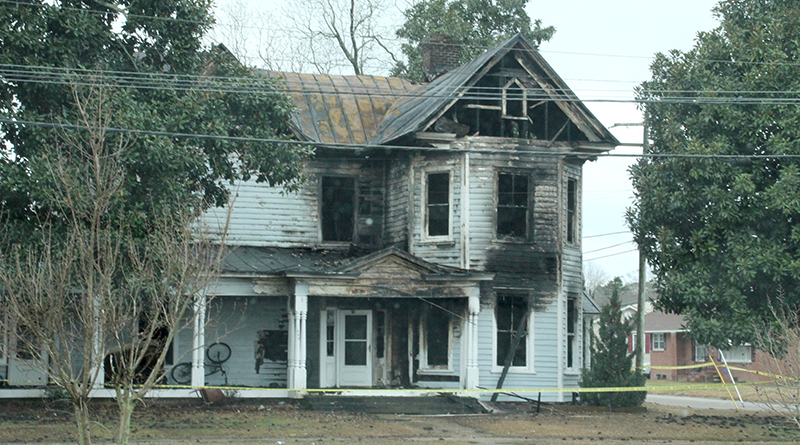 Personnel from four fire departments battled a blaze on Sunday morning in Ahoskie at this residence on East Church Street. Staff Photo by Cal Bryant

One of the residents had to be rescued after becoming trapped in a downstairs room, according to Ahoskie Fire Chief Michael Bradley.

“She was trapped inside one room with fire in the rooms around her,” Bradley said. “Ahoskie Police Sgt. Michael Kellett and one of our firefighters, Devonte Wiggins, broke out a window from the outside of that room and were able to get her out. I commend their actions as they were able to save a life.”

Bradley said the victim did suffer smoke inhalation and was still hospitalized as of Monday.

“Emergency response agencies in small towns are great about assisting each other,” stated Ahoskie Police Chief Jimmy Asbell. “I’m happy that one of our officers, Sgt. Kellett, was on the scene and provided assistance in a life-threatening situation.”

Bradley said his department was notified of the fire at 5:34 a.m. at 502 East Church Street. He said smoke and flames were showing at the residence upon the arrival of the first unit.

The last fire unit left the scene at 12 noon.

Bradley said the home, owned by Jerome Burden, was a total loss.

The cause of the fire is under investigation.

“We were able to determine that the fire began downstairs and spread very quickly due to the age of the home. As of right now we’re still trying to determine what sparked the fire,” Bradley said.

He added that the Red Cross was contacted and met with each of the seven residents on Sunday afternoon at the Ahoskie Fire Station.