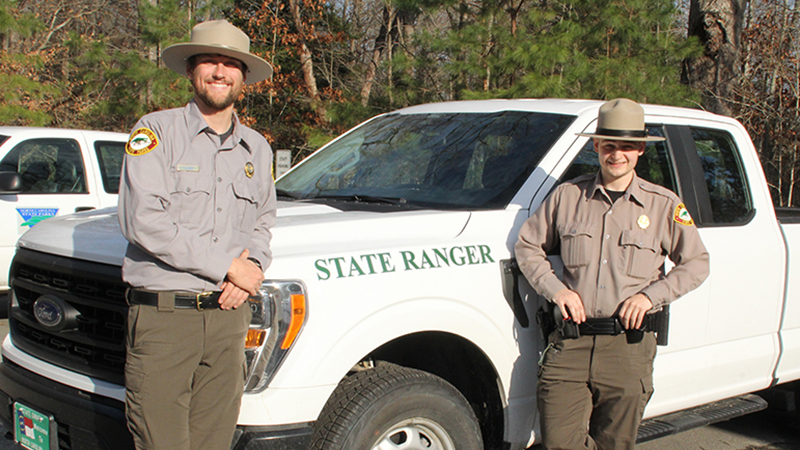 GATESVILLE – The natural beauty of Merchants Millpond State Park continues to weave its magic spell over those who walk or canoe its vast acreage.

That “spell” even consumes those who work there, to include the park’s two newest Rangers – David Schafer, a native of Rutherfordton in the western part of the state, and Cody Hinson, who hails from Cerro Gordo, located near Wilmington.

Schafer began his duties as a Park Ranger in May of last year while Hinson joined the staff in November.

After college, Schafer worked for three years with the Appalachian Trail Conservancy in the Great Smoky Mountains National Park. That seemed to be a natural fit as his hobbies include rock climbing and backpacking.

While working with the Appalachian Trail Conservancy, Schafer’s job was to offer advice and tips to the hikers as well as educating them on how leave the environment as well or better than they found. He also helped to maintain the trails.

“It’s a busy park; those who hike the entire Appalachian Trail will start down in Georgia in early February to March and come through the Smoky Mountains from March through May. Over a span of a couple of months you’ll see around one thousand hikers,” Schafer said.

He added that he was inspired by that line of work after he personally hiked the Appalachian Trail at the age of 18. His loving of hiking led him to explore other parts of the nation, to include the Pacific Crest Trail and the Continental Divide Trail.

“Going through these really remote and beautiful parts of the United States made me realize the importance of having and preserving these natural landscapes. That made me pursue a career in conservation,” Schafer said.

The vast beauty of North Carolina is what led the 29-year-old Schafer to a job with the State Parks system.

“I’m from the mountains, but when I first visited Merchants Millpond in December of 2021 I had never seen anything like this,” Schafer noted. “We have nothing like this in western North Carolina. This is a special place; it’s like a whole different world. This state has so much to offer and each of our state parks offer something unique.

“Cody and I learn something new about this park every day, whether it’s the different species of trees here or how the beaver lodges and beaver dams effects the local eco system. And this place can be explored in different ways, by canoe or by hiking one of the trails,” he added.

Hinson, age 25, is a 2021 graduate of NC State University where he majored in Fisheries, Wildlife, and Conservation Biology. He enjoys fishing and reloading ammo.

“I’ve always been an outdoors kind of guy,” Hinson said. “In my early teens, my family took a road trip to Las Vegas and back, stopping at different state and national parks. A few years later we did it again, this time to San Francisco and back. I got to see the Redwood Forest Park on that trip. I was maybe 13 or so when I decided I wanted to be a park ranger…and now, here I am.

“I’m use to a swamp environment where I’m from, but Merchants Millpond is so unique,” he added. “My first day here I hiked one of the trails; walked around to get a feel of the natural environment. I do have a natural resource background so I know some about swamp ecology and what natural and animal/mammal species you typically find in areas such as this. But you still need to learn all you can about it so you can educate others who visit here.”

Due to the fact that he was raised in a rural area, Hinson said he feels right at home in Gates County.

“The people here are just like back home, very warm and friendly; I like it here,” Hinson said.

Now in his third month of employment as a park ranger, Hinson said he is becoming comfortable with his work duties as well as learning more about Merchants Millpond.

“Cody and I have enjoyed these formative experiences that led us to seek out a career as conservation officers,” Schafer remarked. “Enjoying outdoor spaces and sharing the same ideas of how to preserve and manage those spaces as well as educating others about those spaces is what led us here to Merchants Millpond.”

While the new rangers said they would seize a future opportunity to transfer to a park closer to their respective homes, both seem content to enjoy their time at Merchants Millpond.

“I love it here,” Schafer stressed. “I want to get to know the local community better. People here are extremely friendly.”

“Please come and check out the millpond; you’ll love it just like we do,” Hinton stated.

Merchants Millpond State Park centers on a 760-acre millpond more than 190 years old. Hiking the surrounding trails or paddling the placid, shallow waters of the pond offer a great way to explore this wetland environment. Old-growth cypress trees adorned with Spanish moss create an “enchanted forest,” particularly at Lassiter Swamp. Visitors have even spotted the American alligator here, at the northernmost point of its range.

There is camping (tent sites as well as backpacking sites and paddle-in sites), a bathhouse, 10 miles of hiking trails, five miles of biking trails, canoeing (bring your own or rent one), fishing (to include a boat ramp) picnicking, and the Visitors Center, complete with exhibits, an auditorium, and a classroom.

Park hours are 8 am until 6 pm (January/February/November/December), 8 am until 8 pm (March/April/May/September/October), and 8 am until 9 pm (June/July/August).