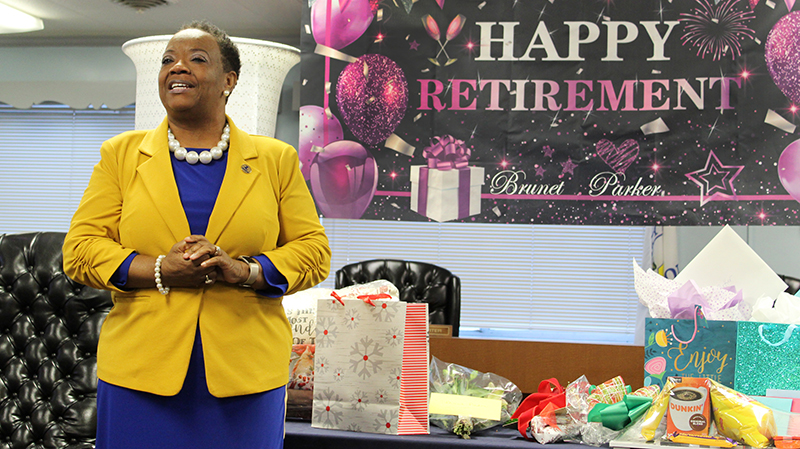 Standing in front of her retirement banner, Brunet Parker makes remarks at the close of her 30-year-plus career with Hertford County Public Schools. Staff Photo by Holly Taylor

WINTON – A long career with Hertford County Public Schools (HCPS) came to a close at the end of November.

Brunet Parker, the district’s Public Information Officer, retired from her position after more than 30 years serving with the local school system.

A retirement celebration was held at the HCPS District Office in Winton on Nov. 30.

Coworkers, family members, and friends gathered to share their congratulations with Parker. They recalled stories of how welcoming and kind Parker has been over the years, and how she often worked behind the scenes to make sure things were running smoothly.

“This has been an enjoyable ride,” Parker said as she thanked those who stopped by Wednesday to pass on their well-wishes. “I love Hertford County Public Schools because they made me who I am today.”

Before working for the district, Parker was first a student herself and then a bus driver. Later, she worked as a substitute teacher and a teacher assistant. At one point, she also served at the district’s alternative school as the principal’s administrative assistant.

As her career with HCPS continued, she became a Business Information teacher and also became the advisor for Hertford County Middle School’s chapter of Future Business Leaders of America (FBLA). She later made the switch to working as the Public Information Officer for HCPS until her retirement.

“Finally, I came down here,” she said, referring to the District Office, “and this is where my journey ends. I thank God for a wonderful journey.”

As someone who served many years as spokesperson for the district, she urged people to continue to speak positively to support the students and show that they care about them.

Parker said she always strived to do her best because she was representing not only the school district and her family but also God.

“When you represent God, that means you need to give all that you can give, up until the very last bit,” she explained.

She also shared some words of wisdom that had been passed on from her mother.

The warm reception at her retirement celebration was a testament to how Parker succeeded in giving more than 100 percent during her many years with HCPS.