SEVERN – For a town of less than 200 full-time residents, Severn is a busy place on a sun-splashed, nip-in-the-air, late autumn morning. 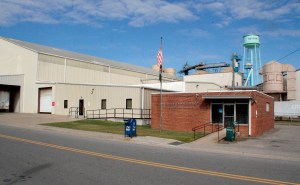 Eighteen-wheelers rumble to and fro along a stretch of Main Street in front of a tiny brick U.S. Post Office. Ditto for regular size cars and trucks…as well as “whirring” sounds made by a fleet of forklifts, some packed with items, some en route to make pick ups.

Meanwhile, the whistle from a freight train pierces the crisp morning air, slowly passing through the heart of the town as it makes its way north to the main CSX line in nearby Boykins, VA.

Welcome to another day in the life of Hampton Farms…aka Severn Peanut Company whose 75-year-old business consumes a large part of the town as well as increasing its population dramatically on workdays.

Hampton Farms, the leading roaster of in-shell peanuts in the United States, still remains family owned and operated after its founding in 1947. Even before that time, George Dallas Barnes began farming in 1917 and dabbled in the business of buying peanuts from other local producers. Other Severn families involved at that time, to include cotton ginning, were Britt (Charlie and Ralph), and Watson (Royal and Parker).

“It was my dad, Garland Dallas (“Mutt”) Barnes, who wanted to get into peanut shelling after World War II,” said G. Dallas Barnes who has been at the helm of the Hampton Farms family of companies since 1990. 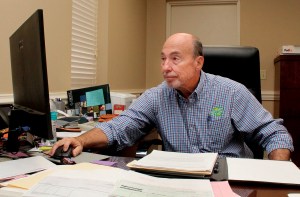 G. Dallas Barnes has been at the helm of the Hampton Farms family of companies since 1990. The diversified business, based in Severn, has operations all across the United States. Staff Photo by Cal Bryant

Barnes explained that back then, shelling plants were primarily constructed of wood or brick and would be four to six stories tall. The peanuts would be elevated to the top and shelled at the highest levels, and then were gravity fed from point to point. The finished product was packed in bags (100 to 110 pounds) and carried out on hand trucks, roughly six bags at a time.

From that hard work sprang the idea of growth.

In 1958, Meherrin Agricultural and Chemical was formed to provide grower services to farmers throughout the southeastern United States.

By 1989, the Hampton Farms name was founded, which represents a full line of services as it roasts, packages and markets its finished products direct to customers.

Before the turned of the 21st century, the company acquired several other nut producers, starting in 1996 with Martinelli’s Peanuts in Springfield, Massachusetts. One year later, Portales Select Peanut Company of New Mexico was added, broadening the reach of the North Carolina operation into the western half of the nation. 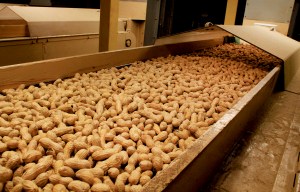 After a thorough cleaning to remove dirt and other debris collected during the harvest process, these peanuts ride along a conveyor belt en route to being sized. Staff Photo by Cal Bryant

The company’s most recent acquisitions are Stone Creek Foods (relocated in 2020 from New York to Springfield, MA) and Houston’s Peanuts of Dublin, NC (2022).

Even with that growth, the company remains steadfast to its founding principles.

“Maintaining honesty, integrity and fairness is what got us to where we are today,” Barnes stressed. “Yes, we have expanded our operations to other states and regions, but our roots remain deep here in northeastern North Carolina and southeastern Virginia.

“Our primary shelling plants are in Severn, where we clean, shell, size, sort, and pack raw peanuts and seed peanuts,” Barnes explained. “Our in-shell peanuts are roasted and packed in Severn, while bulk and jar peanut butter are made in Franklin, VA. Over in Edenton we blanch peanuts, manufacture peanut butter, as well as oil roast and honey roast and package nuts. Meherrin Ag’s main offices are in Severn, as well as its crop protection distribution center. As well, they treat wheat, cotton, and soybean seeds in Pendleton.”

“We’re fortunate to be located where we’re are to employ people from right here in Northampton County as well as Hertford County, Halifax County, and Southampton County in Virginia; we even have some who drive in from the Emporia, VA area,” Barnes stated. “We take pride in employing local people who we feel blessed to have as part of our company.” 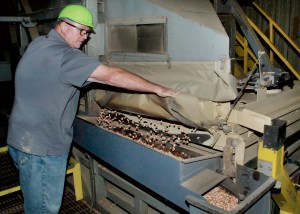 Sam Cannon, manager of the shelling plant in Severn, checks on the progress of the operation. Staff Photo by Cal Bryant

The Hampton Farms workforce at all locations maintains regular training as a processor of edible products. There are protocols firmly in place at the plants that promote the safe handling and processing of the various products.

“Food safety is huge,” Barnes noted. “As we began investing in new plants, we had food safety and quality in mind. The knowledge we possess today regarding manufacturing and tracing food borne illness makes it imperative we stay on top on our game and keep investing wisely into those areas.”

While investments in food safety and increased automation of the equipment keep Hampton Farms at the top of its game, none of it is possible without the main ingredient of this booming business – high grade peanuts that are grown in the ‘Carolinas and Virginia.

Typically, during the months of January and February, Hampton Farms enters into purchase contracts with peanut producers. When those crops are harvested in October/November, the peanuts arrive in bulk. They are government graded and then stored in warehouses. The next stop is the shelling plant where the first step is a thorough cleaning to remove dirt and other debris collected during the harvesting process.

The peanuts are then sized, with the largest ones remaining in-shell, and stemmed (removing the “tails” from where they were once attached to the vine). 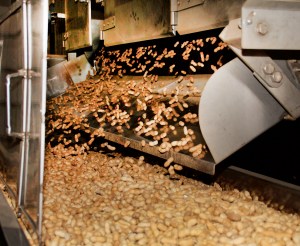 Freshly roasted peanuts fall onto a conveyor belt that transports them the packaging area of the facility. Staff Photo by Cal Bryant

“The smaller grades are shelled and then they are resized, sorted and packed in 2,000-pound totes or they leave here in bulk,” Barnes explained. “From there, if it’s not immediately processed for shipment to customers, it goes into our cold storage units in Severn, Garysburg, Windsor, Edenton, or Courtland (Virginia) until the time arrives for those to be processed.”

Barnes said Hampton Farms is extremely blessed with producers who pride themselves in growing a quality product.

“We have outstanding peanut growers, and farmers of other crops. We have to bring solutions to help in their operations and success,” he stressed.

While the various products under the Hampton Farms name are readily available at retail venues, to include grocery stores, and online through its website, those peanuts can be purchased at Major League Baseball ballparks nationwide.

“We’ve had that contract since the 90’s,” Barnes said. “We have also contracted with individual colleges such as NC State, UNC, as well as others.”

Barnes didn’t rule out adding to the company’s growing portfolio.

Another source of pride within the company is Meherrin on a Mission.

“We founded a Ministry Team around 15 years ago,” Barnes recalled. “Through that, we have brought in Corporate Chaplains of America, Caring Teams, Helping Hands, Life Lessons over Lunch, Prayer Teams, and other things. Our employees do an outstanding job of leading these.” 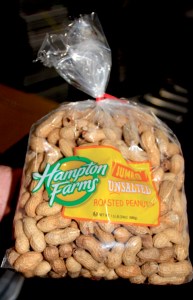 A five-pound bag of Hampton Farms roasted peanuts is ready to be shipped out to a customer. Staff Photo by Cal Bryant

From that, Meherrin on Mission was born.

“Really it is about serving others and giving back to our communities and employees,” Barnes said. “Our mission is to cultivate a work environment where the seed of God’s word is allowed to grow and bear fruit. We are doing disaster relief work, college scholarships for our employees and local customers, and mission work with local and international ministries.” 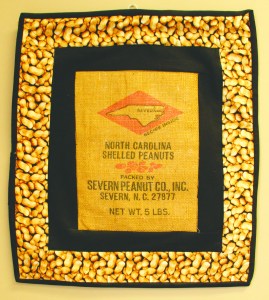 Part of the past – a portion of a burlap bag emblazoned with the company’s founding name – is displayed in the Hampton Farms office in downtown Severn. Staff Photo by Cal Bryant

In closing, Barnes talked about the legacy of the Barnes/Britt/Watson families and how the next generation is preparing to build upon that solid foundation.

“Today we are proud to be the third generation…myself, Paige (Pinnix, his sister), Rick (McGee), RP (Watson), Jody (Barkley), and Jim (Davis). The fourth generation of leaders are being developed….I’ve got five of my kids working here, RP’s daughter works here, Paige’s son works here. We’ve got a lot of talented employees who know and understand this business. Hopefully, we will slide over and they will do an outstanding job for generations to come.”

And that means downtown Severn will remain as the bustling center of the peanut universe.