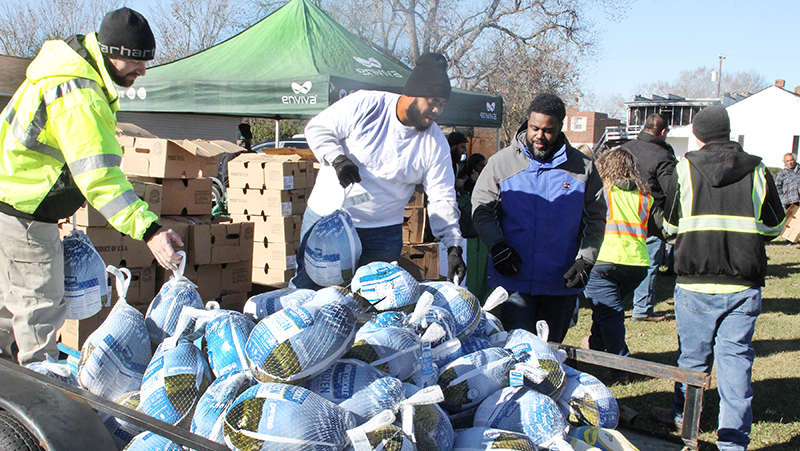 Volunteers are shown taking part in the second annual Thanksgiving Turkey Giveaway held Monday at the Hunter’s Funeral Home property in Ahoskie. Over 300 turkeys were distributed along with other traditional items for a Thanksgiving meal. Staff Photo by Cal Bryant

AHOSKIE – Over 300 turkeys and other food items that comprise a traditional Thanksgiving meal will find their way to dinner tables across the local area thanks to an effort by Enviva.

The wood pellet manufacturer with a mill in Ahoskie partnered with Ahoskie Mayor Weyling White, the Ahoskie Police Department, Hunter’s Funeral Home, and Roanoke Electric Cooperative to distribute turkeys and canned goods to members of the local community on a beautiful November morning here Monday.

“I am so thankful for the generosity that Enviva has shown the Town of Ahoskie and our surrounding communities for the Thanksgiving holiday,” stated Mayor White. “Their support and commitment to servant leadership in our community has continued to bring joy and food to many families in our area.”

The turkey distribution point was the First Street side of Hunter’s Funeral Home. Volunteers from Roanoke Electric, Enviva, and the Town of Ahoskie shuttled between the pile of boxed turkeys and bags of canned goods to deliver to community members in a drive through event.

Ahoskie Police Chief Jimmy Asbell and his officers did a terrific job of keeping the traffic organized, steadily reducing the long line of cars.

“This event is gaining momentum, that’s for sure,” stated Enviva’s Chris Brown. “In only our second year, we added another partner with Roanoke Electric coming on board this year and judging by the line of cars before we started, the community obviously looks forward to it.

“Many thanks to Mayor White, Chief Asbell, and Town Clerk Jennifer Bracy for orchestrating a safe and positive experience for everyone involved,” Brown added.