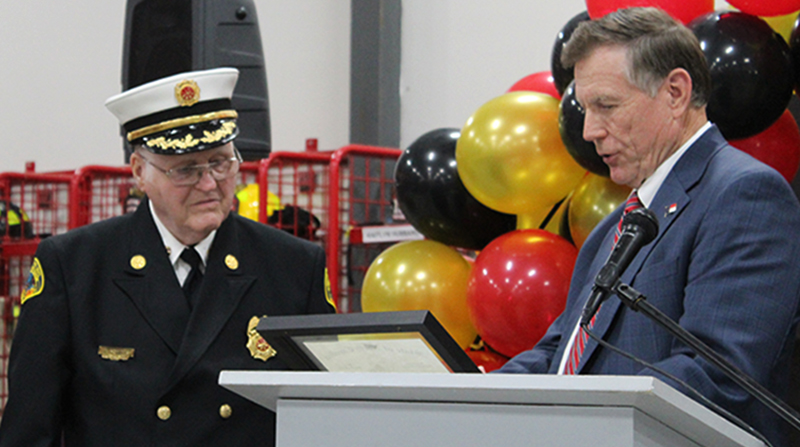 GASTON – After 70 years of firefighting service, it’s no surprise that Ed Porter Sr. has received many accolades over the years. At his 86th birthday celebration here Monday, Nov. 14, he was surprised with several more. 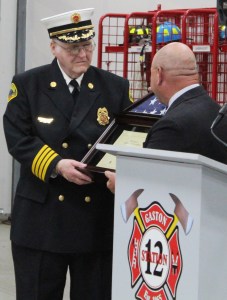 Porter began his seven decades of service at age 16 when he joined Rosedale Volunteer Fire Department in Maryland. When he moved to Northampton County in 1983, he joined Gaston Fire-Rescue-EMS where he’s been serving ever since. Currently, he is Deputy Chief of the department.

Friends, family, and community members gathered at the fire department building for the evening’s celebration.

North Carolina Insurance Commissioner Mike Causey, who also serves as the State Fire Marshal, kicked off the presentation by awarding Porter the prestigious Order of the Guardian award.

“This is the highest award we give from the Department of Insurance. We don’t give out many of these awards,” Causey said, explaining that they usually are given to people who’ve reached the milestone of serving for 40 or 50 years.

Causey said Monday’s event might be the first time he’s recognized someone for 70 years of service. 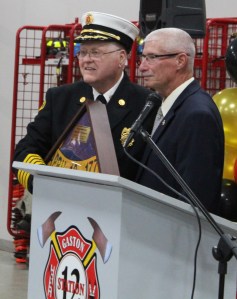 In addition to his work as a firefighter, Porter served 20 years in the Baltimore County Police Department and six years in the Army National Guard. He was also called to the ministry in 1972 as a preacher. In 1989, he was hired at Halifax Community College (HCC) to be the fire and rescue coordinator and chair of the criminal justice department. He continues to serve as an instructor there.

“First thing I’ll say is, y’all surprised me,” Porter said to the crowd gathered at the station. “I don’t know what to say. I’m honored.”

“What I’ve done in life, I give God the praise,” he continued. “I thank the Lord each day for the new day and the wherewithal to get up and go and be of some help. I’ve been blessed to serve.”

The Order of the Guardian award wasn’t the only gift Porter received that evening.

Fellow HCC instructors Alan Roye and John Young presented an American flag and a North Carolina flag to Porter, and shared their own congratulations with him.

“Back in 1991, I met this man at the community college. I attended the law enforcement instructors’ school,” explained Roye, who is retired from the Northampton County Sheriff’s Office. “I spent two weeks with him, and I got a really good friend out of it. 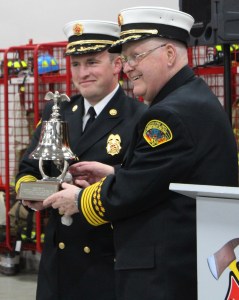 Eddie Porter III, Assistant Chief of Gaston Fire-Rescue-EMS, awarded his grandfather Ed Porter Sr. a replica of the bell which is mounted to the front of one of the department’s fire engines. Staff Photo by Holly Taylor

“I’ve always wanted to be like you, but I never will. You’re the greatest man I think I’ve ever known. What an honor it is to be able to speak at your celebration,” Roye concluded.

Young, who served many years as Police Chief in Jackson, said he had fond memories not only from working as an instructor at HCC but also having Porter as a teacher for Basic Law Enforcement Training (BLET) class.

Others who spoke briefly to share their congratulations included other HCC instructors Andy Bryant and Mike Moseley, along with Trooper T.L. Davis from the North Carolina Highway Patrol, and Roy Bell, who serves as mayor of Garysburg and as a member of Garysburg Volunteer Fire Department. All of them called Porter an inspiration and a good mentor.

Several of Porter’s family members also spoke to share their admiration for all his dedicated work over the years.

His nephew, Howard Porter IV, shared stories of how Porter had made an impact on his life, including one about how “Uncle Ed” saved his life when he was drowning in a swimming pool as a child.

Ed Porter Jr., who serves as Chief of Gaston Fire-Rescue-EMS, recalled a funny story from a childhood vacation where his father chased a purse-snatcher at the beach, even though he was off-duty at the time. He also referenced his father’s preaching as an integral part of his life alongside their work together as firefighters.

Grandsons Eddie Porter III and Dylan Clark, both following in Porter’s footsteps to serve with the Gaston department, talked about the joy of being able to work alongside their grandfather. 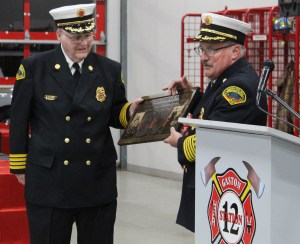 Gaston Fire-Rescue-EMS Chief Ed Porter Jr. presented his father with a plaque commemorating his milestone 70 years of firefighting service, which began first with the Rosedale Volunteer Fire Department in Maryland before he moved to Gaston. Staff Photo by Holly Taylor

Clark recalled going to help put out an 18-wheeler fire on Interstate 95 a few years ago. It was tough work having to handle one of the water hoses alone, but it suddenly got easier, and that’s when he realized his grandfather had joined him to help.

“He was using my back as the shield [from the heat],” Clark explained. “That really is one of my greatest memories.

“I’ve learned a ton in the classroom and in the training grounds here. But you can learn just as much sitting in his office,” he added.

Porter III, Assistant Chief of the department, said that even earlier that day, his grandfather had climbed into one of the firetrucks to answer a call. Even though he isn’t able to do as much as he did in the past, “he finds a way to help.”

“He’ll do anything for you. I hope to one day be half the man he is,” Porter III said.

As with any good birthday celebration, the event wrapped up with the crowd singing “Happy Birthday” to Porter and enjoying a slice of cake.