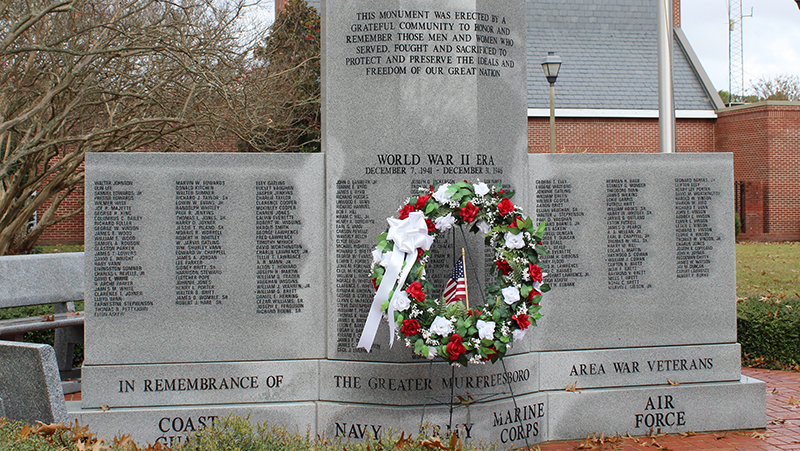 A wreath, donated by the Murfreesboro Coffee Club, stands in front of the War Veterans Memorial Monument as a tribute to Veterans Day. Staff Photo by Holly Taylor

The granite structure, located right in front of the town’s flagpoles, contains inscriptions of almost 500 names of local townspeople who served during World War II, Korea, Vietnam, and the Gulf Wars. Usually, it’s also the site of the town’s annual Veterans Day and Memorial Day ceremonies, but rainy weather this year sent attendees inside Town Hall for the Nov. 11 event. 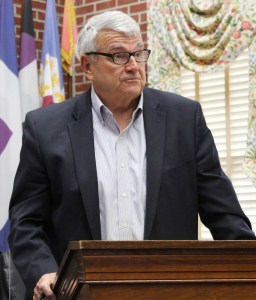 “It says on the inscription out there that this monument was dedicated to the citizens of town by work done by the veterans, under the guidance of the War Veterans Memorial committee,” explained Murfreesboro Mayor Hal Thomas, noting that they chose to honor the group responsible for the monument this year.

There were 14 people on the original committee which formed in 2006, and now only five are still alive.

Of the five left, Farnham, Felton, and Lee were able to attend Friday’s event as featured speakers.

Farnham – a retired Captain from the US Navy – spoke first, sharing an overview of what the group did to make the veteran monument a reality.

He said the idea was first developed in July 2006 by Dickerson, Bunch, and Storey. By the next month, they’d already recruited members and an attorney, and formed a nonprofit corporation. 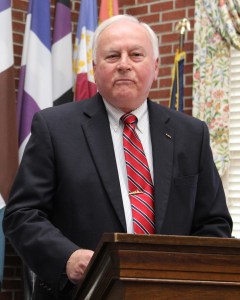 “The bad news was that we had not settled on a design, we hadn’t selected any contractors, and we didn’t know how much it was going to cost,” Farnham recalled.

But by October 2006, the group had raised almost $36,000 and were working on designs with a contractor. Their next goal was to gather the names that would be engraved on the stones.

The Veterans Affairs Office in Raleigh shared names of soldiers who were killed or missing in action, and Farnham added, “the rest of the names came from our town records, canvassing neighborhoods, recollections of comrades, family members, and friends.”

The group also had to tackle other issues as the project progressed, including redesigning the structure to include all the names and readjusting its position to fit in front of the town’s flagpoles. But in the end, they raised enough money to cover the $65,000 total budget and the memorial monument was dedicated at the town’s 2007 Memorial Day ceremony.

“In order to build a monument of this quality in less than a year, we have a great deal of people to thank,” Farnham concluded.

Felton, who served some time in the National Guard, recalled that Dickerson had been the one to ask him to join the committee.

“I never considered any answer but yes,” he continued. “My function was to provide a crane to set various parts. I was truly honored to have given that assistance.” 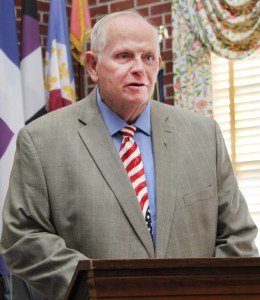 Felton also spent a few minutes speaking about sacrifices made by servicemembers and their families.

“When a family sends a son or daughter off to service, they send a very integral part of their family. That son or daughter will be changed by that service,” Felton said.

He encouraged people to thank veterans and their families whenever you see them.

Lee, an attorney at local firm Revelle & Lee, wrapped up the guest speakers by sharing what role he had in the memorial’s construction.

“In 2006, a group of veterans came to my office on Main Street,” he recalled. “They had a plan to finance, construct, and maintain a memorial to veterans in our area of past wars.”

He helped them create the nonprofit organization and draft bylaws for the group to ensure the work would continue in the future.

“These bylaws have governed this nonprofit corporation for 16 years, and it’s a perpetual thing. Long after all of us are gone, it’ll still be there,” Lee explained. “Our firm would like to thank the organization for past and present treatment to veterans, and for allowing our law firm to assist.”

Following the presentation, Mayor Thomas, a retired Master Sergeant from the US Air Force, read a poem entitled “I am a Veteran” and thanked everyone for attending.

Rev. Berna Stephens, who also serves as Mayor Pro Tem on the Town Council, offered the opening and closing prayers for the event. Refreshments donated by Mary Etta Flowers were served afterwards, and the memorial wreath placed outside was donated by the Murfreesboro Coffee Club.