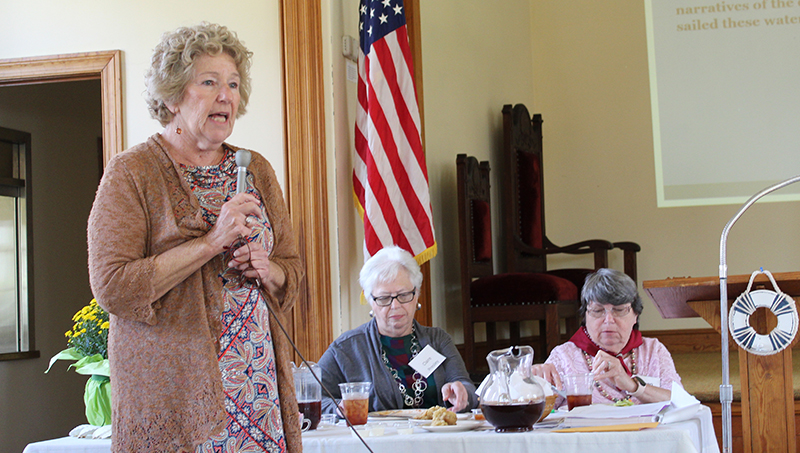 Lucy Rebecca Daniels (standing) shares the research performed by her late husband, Don Upchurch, as she addresses members of the Ahoskie Women’s Club at their luncheon meeting on Wednesday. Staff Photo by Holly Taylor

AHOSKIE – What’s the story behind the remains of an old ship sunken in the depths of Bennetts Creek?

Members of the Ahoskie Women’s Club got to hear more about this fascinating bit of history during their monthly meeting here on Sept. 28. Lucy Rebecca Daniels, co-author of the book “In Pursuit of Dorothie: The Lost Colony Ship”, was the featured guest speaker at the event.

Daniels’ husband was the late Don Upchurch, a longtime local radio broadcaster who also had a passion for history research. The story of the “Dismal Swamp Schooner” by Roy Johnson caught Upchurch’s attention, and he spent years afterwards researching more about the mystery ship.

The results of all that research were comprehensive audio recordings by Upchurch that Daniels later transcribed after his passing in 2015. A few years later, she was able to publish all that research into book form.

As Daniels explained to the group of ladies gathered for the Women’s Club meeting, the namesake of the book – the ship christened Dorothie – was a 40-foot vessel that sailed from England to Roanoke Island in some of the earliest exploratory expeditions to the North Carolina coast.

During her talk, Daniels set a vivid picture of the scene, sharing details of several early expeditions to Roanoke Island. Explorers met with the local Native American tribes, mapped out the area, and even set up a small military base on the island for a time. But the real mystery comes from the famed “Lost Colony” who settled on the island in 1587, but were gone with no explanation when ships returned three years later.

The book lays out the case for why the sunken ship in Bennetts Creek, an offshoot of the Chowan River, could have been the Dorothie which the colonists had at their disposal. It’s possible, for example, that the colonists may have been trying to make their way to the Chesapeake Bay – their original destination before they got to Roanoke Island – through an inland route instead of by open ocean.

High post-hurricane waters and faulty navigation may have been factors that sent them down the wrong route.

The full speculative story is available within the pages of Upchurch and Daniels’ book, which is available for purchase on Amazon.

Daniels wrapped up her presentation by sharing her own theory that perhaps the colonists split themselves up amongst the Dorothie and a few smaller boats. Those boats could have traveled to different destinations, including “Site X”, located on Salmon Creek, another offshoot of the Chowan River in Bertie County.

“I don’t know this [explanation] to be a fact, but there is a ship in Bennetts Creek,” Daniels concluded. “It’s history right here in our backyard, whatever the source of the ship is. What mysteries does it hold?”

The answers to that question may never be fully uncovered, but the extensive research conducted by Upchurch for decades will continue to live on.