Playing the role of a law enforcement officer on TV will come easy for Aqeel Taahir Ash-Shakoor.

Prior to launching his acting career in 2015, the Murfreesboro native once worked as a Deputy for the Hertford County Sheriff’s Office.

After appearing as a NC State Police Officer in the HBO Max Limited Series, “The Staircase,” earlier this year, Ash-Shakoor returns to TV once again on the long-running series Law & Order: SVU 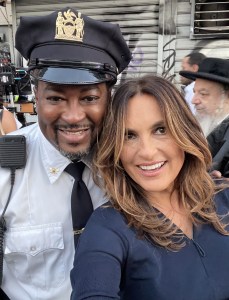 Murfreesboro native Aqeel Taahir Ash-Shakoor (left in both photos) poses on the set with two of the stars of the long-running TV series Law & Order SUV: Mariska Hargitay (above) and Ice-T (below). Contributed Photos

“While filming the first episode of the new season, Mariska Hargitay, who plays Olivia Benson, released two surprise early photos of myself with the original lead cast on her Instagram that took the public by total surprise,” Ash-Shakoor said.

He stated that filming on the busy streets of New York City was a new level of excitement. Bystanders and true Law & Order fans filled the streets and requested that he take pictures with them as they recognized him to be a new cast member.

As to how much regular viewers of the show will see him in his new role for season 24, he shared that everything is still under wraps and “we’ll have to stay tuned.”

On Aug. 12, the world witnessed him in his recurring co-star role as Pastor Donald Turner in the Amazon Studios/ Netflix spin-off comedy series, “A League of Their Own.” The new comedy series is the spinoff of the original Penny Marshall feature film, “A League of Their Own. The show has been receiving raved reviews and shows no signs of slowing down.

Later this year on the big screen, Ash-Shakoor will play the supporting role of Frank, a concerned construction worker, in the movie “On Sacred Ground.” It’s a story about a journalist and oil company executive finding themselves on opposite sides of the fight during the construction of the contentious Dakota Access Pipeline that runs through the Standing Rock Indian Reservation in North Dakota. Cast members include William Mapother, Amy Smart, Frances Fisher, David Arquette, and others.

He will also hit the big screen in the highly anticipated “SHIRLEY,” a feature film highlighting the life and presidential campaign of Shirley Chisholm. Ash-Shakoor will play legendary James Farmer, Shirley Chisholm’s opposing candidate. Farmer was one of the students from the popular Wiley College debate team, for which the movie “The Great Debaters” was created starting Denzel Walker. 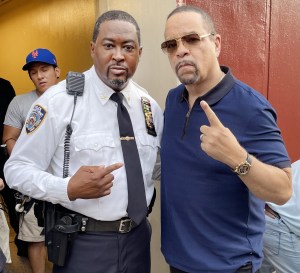 Previously, Ash-Shakoor had roles in “Turn of The Cheek,” a faith-based film aimed at forgiveness. It is written and directed by Janaya Black of Black-Smith Enterprises. His other lead role was in “Cain and Abel” – an upbeat edgy drama produced by Renika McQueen and directed by Kamal Smith.

Prior to these two TV movie roles, Ash-Shakoor landed his first ever modeling job in May 2015 with the well-known Mid-West Fashion show, “Walk Fashion Show.” Since then, he has filmed several commercials on the national level, feature films, and short films. He has also co-starred in the popular “Chicago Med” on NBC and has been featured in other TV shows on the major networks, to include “The Chi.”

After relocating his family and himself back in Hertford County in July 2000, Ash-Shakoor begin working as a Deputy for the Hertford County Sheriff’s Office for the next seven years before returning to college to earn his Bachelors of Science Degree in Business Administration from Saint Paul’s College in Lawrenceville, VA and then earning his Masters of Science Degree in Criminal Justice from Everest University in Tampa, FL.

In 2010, Aqeel returned to North Carolina, employed by the Bertie County Probation and Parole Office. His first acting role was in 2010 when he played lead as Jesus Christ in a church play titled, “I’ll Rise Again,” at the C.S. Brown Cultural Arts Center located in Winton.

Shortly after relocating to Lansing, MI in 2013, Aqeel and his wife, Tanesha Ash-Shakoor, graduated and received their Doctorate Degrees in Ministry from the Chaplaincy International Canadian Association (C.I.C.A.) University & Seminary, Houston, TX. They were appointed Ambassadors At-Large to the United Nations, and planted their church ministry, Walking With Christ Worship Center.