Special to the RC News-Herald

WILLIAMSTON – Riverside-Martin County broke a first-quarter tie and never looked back as the Knights remained undefeated (5-0) on the season with a 68-44 win over Gates County here Friday night. The Knights also won their Four Rivers 1A Conference opener (1-0).

One thing is for sure when these two teams meet: it’ll be a high-scoring affair. The 112 combined points scored Friday night eclipsed last season’s 58-36 outcome. 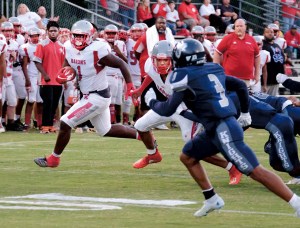 Damari Cooper (#1) turns the corner for a big gain, part of his 194 rushing yards and three touchdowns in Friday’s loss at Riverside High School. Photo by Andre Alfred

“I expected it to be high scoring,” said veteran Knights coach Brian Paschal. “It was just like last year. When teams run at you you’ve got to be able to man-up and stop them and we weren’t very good at it tonight.”

One player Riverside had no answer for was bruising running back Damari Cooper, who torched the Knights for 194 yards on 15 carries, which also included three Red Baron touchdowns. Backfield mate Semaj Cross finished close behind with 136 yards on the ground, while quarterback Noah Harris had 105 yards. The ‘Barons never once put the pigskin in the air on offense, while amassing a whopping 498 rushing yards.

Both teams opened the game with turnovers on their opening drives. Gates’ second time around was more successful, driving 52 yards on six plays with Cooper barreling over tacklers for the final 19 yards to pay-dirt. Harris ran in the two-point conversion and the Red Barons led it 8-0.

But it would be the final time they were in front. Riverside – who didn’t punt the entire game – scored on their next two possessions to lead 16-8 early in the second quarter.

Gates countered with a six-play scoring drive, again seeing Cooper lay waste to Riverside tacklers with a pair of big runs, the last as he scored his second touchdown of the night on a 10-yard scamper. The point-after failed and the ‘Barons trailed 16-14.

Riverside scored again to lead it 22-14, but back came Gates on a 20-yard Cooper run to the end zone to make it 22-20. Dorien Melton plunged over for the two point conversion, knotting the game once more at 22-all.

Riverside then took the ensuing kickoff 61 yards for a score, then capitalized on a Gates turnover for another score and led it 36-22 at halftime.

Riverside was intercepted deep in Gates territory on their first possession of the second half, and Cross returned it 58 yards to the Knights’ 31. Three plays later Gates had cut the deficit to 36-30.

But Riverside struck back again with the big play, this time going 73 yards for another score on their first play from scrimmage and upping their lead to 44-30.

It was 50-30 when Cooper found the end zone once more, pulling the ‘Barons within two touchdowns at 50-36. But, again, it took Riverside just two plays to get on the scoreboard again.

Cooper’s final foray to the end zone with a little over two-and-a-half minutes left made it 56-44 following a Jordan Robinson run for two points more to end Gates scoring for the night.

The Knights struck for two more touchdowns, including the last one on the final play of the game when Gates fumbled a hand-off that was scooped up for a score, making for the 68-44 final.

Gates dipped to 2-3 overall and 0-1 in conference play. The ‘Barons will have this weekend off before traveling to defending state champ, Tarboro, on Sept. 30.