ELIZABETH CITY – There were audible murmurs of ‘The GOAT!’ (Greatest of All Time) coming from his peers as he took the stage, but all he did was smile and shake his head from side-to-side in mock denial. 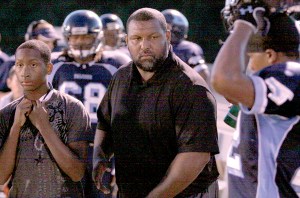 As a surprise to some, but not to all, Greg Watford is back in the high school football coaching fraternity once more, and he arrives at South Creek High School in Robersonville at a time when the Cougars need him most: coming off a winless season.

The Ahoskie native was supposed to be retired, but he didn’t stay that way for long.

Watford was one of 10 local high school football coaches from the 1A Four Rivers Conference and the 2A/3A Northeastern Coastal Conference along with several of their players attending the annual Football Media Day held July 29 at the K.E. White Center on the Elizabeth City State University campus hosted by local ECSU radio WRVS 89.9/W18BBtv.

“I brought my assistant coach (Charles Grissett) with me to introduce my player because I’m still learning their names,” he joked.

One has to wonder will his new team buy into what the veteran field boss is selling?

What Watford has for sale are 20 years worth of experience as a head varsity football coach, and Martin County is just his latest stop. He has held that position at seven schools – Bertie High School, Hertford County High School, Northampton High School, Southeast Halifax High School (twice), Southern Vance High School, West Carteret High School, and most recently at North Pitt High School in Bethel, whom he guided to a 7-4 record in 2021 and a first-round spot in the NC High School Athletic Association playoffs.

At every stop along his two-decade journey, Watford worked to resurrect programs that had fallen on hard times.

“Being an Eastern North Carolina guy I knew the tradition here,” he admitted. “State championship in ‘74, success going way back. Last year was more of an anomaly, but these kids hung in there, they persevered. The opportunity to be a part of a community that’s had some struggles, but is trying to grow.”

Watford knows from past experience that he most likely won’t turn around the Cougars program in his first season, instead he’s up to doing the groundwork that will be the stepping stone on the return to being competitive in the conference.

Watford is South Creek’s third coach in the past three seasons. The Cougars had an overall record over that span of 6-22.

“We’re going to come in, hit the ground running, make some changes, and whatever else we need to do to give us the best chance to win.”

Last season Watford’s Panthers were a more mature group in his fourth season. North Pitt ran the option offense with efficiency as the core group began to buy into what Watford was offering.

“That was one of the things, the opportunity to be in a situation where it could be fruitful. We older coaches know it’s not political; it’s about being out here spending time with the kids and having a good time. I’ve told them that from day one, we’re going to have fun,” he said.

While immediate success for his first-year program may be a reach, Watford still displays a positive vibe. One that he hopes rubs off on his kids.

“We’re going to take our 11 and we’re going to come out there on day-one against their 11, and just give it our best shot,” he concluded with a smile.