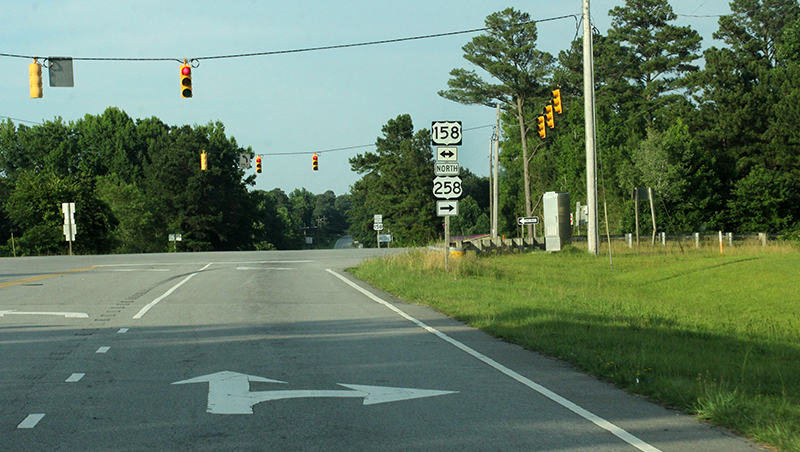 Shown here is one of the two traffic signals that NCDOT plans to remove as part of its changes to the Murfreesboro Bypass. The contract for that entire project, estimated at $6.4 million, is scheduled to be let in February of next year. Staff Photo by Cal Bryant

WINTON – After studying several options, the North Carolina Department of Transportation (NCDOT) will proceed with an access management / safety project for the Murfreesboro Bypass.

Win Bridgers, NCDOT Division One Engineer, confirmed that information as part of his presentation here last week at the regularly scheduled meeting on the Hertford County Board of Commissioners where he updated them on local bridge replacements and projects in the 2020-2029 STIP (Strategic Transportation Improvement Plan).

“I know there’s been a lot of contention about the Murfreesboro Bypass project,” Bridgers told the commissioners. “We’ve discussed this project at length with ya’ll and with our staff in Raleigh. It comes down to this, when a problem is found, and it has been determined there is a cure, once that happens, the do nothing alternative is not an option. We can’t sit back and do nothing.”

“That would be great, but there’s no funding for that at this time,” he stated. “That could change in the future, but at this point right now something has to be done. DOT cannot accept the liability of having an identifiable solution and then not act on that solution.”

NCDOT will proceed with Reduced Conflict Intersections (RCI) along the Murfreesboro Bypass. Much like the Superstreet design that’s used on the four-lane section of US 158, east of the NC 11 intersection to Winton and then on into Gates County, a RCI restricts cross-street traffic from going straight through or making left turns at a divided highway intersection. Cross-street traffic can only turn right. If the motorist needs to go in the opposite direction, a u-turn lane will be installed a short distance away.

The contract for that project, estimated at $6.4 million, is scheduled to be let in February of next year.

Bridgers said the Powell Road, Clover Circle, and Benthall Bridge Road / Spring Avenue intersections along the Bypass will remain as they are due to lower volumes of traffic at those locations. He added that the traffic signal will remain on the Bypass at the Benthall Bridge Road / Spring Avenue intersection.

Another STIP project involving NC 11 near Murfreesboro is that highway’s intersection with Woodrow School Road (SR 1169). There, NCDOT plans to reconfigure that intersection at an estimated cost of $395,000. That project is in the design phase with a contract let date in March of next year.

“If you’ve ever come out from Vann’s Gin heading towards Ahoskie, you can’t turn your head hard enough to [see] a car coming from Murfreesboro,” Bridgers noted. “What we plan to do there will make that intersection safer.”

Bridgers said the project involving NC 461 from NC 45 to Nucor Steel remains on the STIP, despite the contract, slated to be let on June 15 of this year, not being awarded. That project, with an estimated cost of $3.6 million, will modernize the road by widening its travel lanes to 12 feet, adding two-foot paved shoulders, improving drainage, and reinforcing the subgrade under pipes with geotextiles.

“We continuously receive complaints about the condition of that road; the shoulders are beat out on both sides,” Bridgers said. “The bid came in over our engineer’s estimate. Our staff has gone back and looked at this project again. We will make some modifications and let it again.”

In the summer of 2025, NCDOT plans to let the contract to widen US 13 (Memorial Drive) to multi lanes from Peachtree Street to NC 42 (Academy Street). That project, which includes replacing the bridge spanning the railroad tracks, is estimated at $16.5 million.

The most expensive project listed for Hertford County on the STIP is currently on hold. That project, estimated at nearly $109 million but unfunded on the STIP, calls for the widening, to four lanes, and construction of interchanges from the NC 11/NC 561 intersection near Ahoskie to the US 13 / US 158 / NC 45 intersection near Winton.

Other major projects shown on the STIP for Hertford County include a trio of bridge replacement projects. The contract for Bridge #10 on Boone’s Bridge Road (SR 1311) is scheduled to be let in April of next year. The estimated cost of that project is $3.3 million. Bridge #64 that spans the Cutawhiskie Swamp on the Fennell Road (SR 1155) is slated for contract let in April of 2024. That project is expected to cost $857,000. Later in 2024, a contract is scheduled to be let to replace Bridge #60 over the Ahoskie Creek on the St. John-Millennium Road (SR 1112). That project is estimated at $957,000.