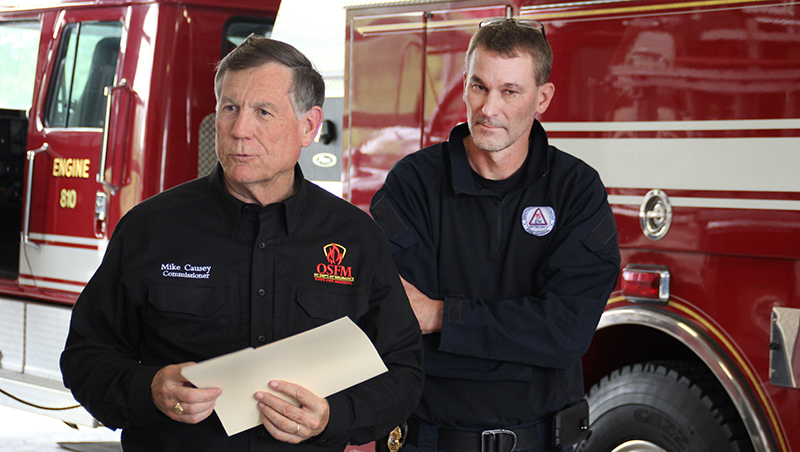 In Northampton County, representatives from the Rich Square Volunteer Fire Department and Gaston Fire Department gathered at the Emergency Operations Center in Jackson to meet with Commissioner Causey, who also serves as the State Fire Marshal.

Both departments received a $5,000 grant each, the funds coming from contributions made by the NC Surplus Lines Association. The organization provided a total of $250,000 to be distributed to fire departments and rescue squads across the state.

Causey explained that the funds can be used to help the departments in various ways, including to buy equipment or pay their bills.

“It’s been difficult for fire departments to raise money the past two or three years because of COVID lockdowns,” he continued. “They couldn’t do fundraisers like they did in the past. So it’s just a huge help.”

In addition to the grant presentation by Commissioner Causey, Rich Square VFD also received a $10,000 check from NC House Representative Michael Wray. That grant money came from the state legislature, which included CARES Act funds in last year’s budget to be distributed to rural fire departments.

Wray noted that all rural fire departments are eligible for CARES Act funds if they go through the application process for it.

“It’ll be a tremendous asset for you guys,” Wray said as he presented the check.

Both Wray and Causey spoke about the good work each fire department does for the community, especially praising Gaston’s annual fire camp program for children and also their junior program which helps train teenagers who are interested in joining the department.

On the afternoon of May 10, Causey made a stop in Hertford County at the Union Rural Fire Station to distribute funds to local fire departments. There he was met by NC House Representative Howard Hunter III and Hertford County Commissioner John Horton.

“The fire departments in the rural areas of our state do a great job, more so because of the limited funds they receive to operate,” Causey said.

Union Rural and Millennium fire departments were each awarded $5,000 checks from the NC Surplus Lines Association. Union Rural Fire Chief Chris Smith accepted both checks as a representative from Millennium was unable to attend.

“Our [state] legislative representatives appropriated this money from the CARES Act, $10,000 of much-needed money to the rural fire departments who applied. My office administers the checks, but you guys here in Hertford County receiving these checks can thank [NC House] Representative Howard Hunter for the work he did for getting us this money,” Causey noted.

In addition to his stops in Northampton and Hertford counties, Causey also visited fire departments in Bertie, Halifax, Beaufort, Washington, Martin, and Edgecombe counties during his two-day tour.