A funeral service will be held on Sunday, May 15, 2022, at 3 p.m. at Bethany United Methodist Church in Milwaukee, officiated by Reverend Carol Taylor. Burial will follow at the Milwaukee Cemetery. 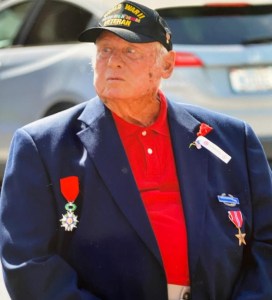 Carl was born on June 3, 1926, to Essie Bernice and Claudie Roy Britt in Milwaukee. He was the last surviving sibling of seven: Raymond, Claudie Marie, Elizabeth, Jack, Charles, and James.

After graduating from high school, Carl enlisted in the U.S. Army on September 16, 1944. He completed his basic training at Camp Blanding, Florida, and served with Company B, 274th Infantry Regiment, 70th Infantry Division. He fought to liberate France, Central Europe, and the Rhineland. He received his honorable discharge in 1945 and was presented the Bronze Star Medal and Combat Infantry Badge. Carl re-enlisted and attained the rank of sergeant. Sergeant Britt served with the Army occupation of Germany after World War II. He received the WWII Victory Medal, the European-Middle East Campaign Medal with two bronze service stars, the Army of Occupation Medal with a Germany clasp, the American Campaign Medal, Good Conduct Medal, and an Honorable Service Lapel Button. Sergeant Britt received his second honorable discharge on April 29, 1947.

On October 1, 2012, Carl was appointed Chevalier of the Legion of Honor by President Hollande of France for his contribution to the United States’ decisive role in the liberation of France during World War II. He received his award at the State Capitol in Raleigh on February 20, 2014.

After returning to North Carolina after discharge, Carl attended East Carolina Teachers College, where he majored in social studies and business administration. He began his career as an administrator and educator, serving as a teacher in Colerain, principal of Woodland-Olney High School, and headmaster at Northeast Academy after his retirement from the public school system. As a classroom teacher, Carl taught history, civics, geography, and business courses. He taught driver’s education to countless Northampton County teens. He was employed part-time by the Northampton County Department of Agriculture for 45 years. Carl has probably walked every field and met every farmer in this county! He was a member of Bethany United Methodist Church, where he taught Sunday school and sang in the choir. He was a member of the Milwaukee Lion’s Club and American Legion.

Carl married Peggy Barnes on August 21, 1955. They built their home on family land in Milwaukee, where they reside today. Along with his wife of 67 years, Peggy, he is survived by his daughters, Ramona Britt Fiorilli and husband, Mario, of Raleigh; Rita Britt McCoy of Washington, NC; and Cheryl McCarthy and husband, Dennis, of Leawood, Kansas. His sons are Kent Britt and wife, Susan, of Winterville; Pollock Britt and fiancée, Tonya Beckner, of Conway; and John Britt and wife, Lisa, of Winterville.

Carl is survived by his grandchildren, Dr. Patrick Fiorilli, Matthew McCoy, Rebecca McCoy Michael, Dr. Andrew McCoy, Leah Britt, John Christopher Britt, and Harrison Britt. He is great-grandfather to Mina McCoy, Hattie and Penn Michael, and Axel and Emilia Lowe. He has many nieces, nephews, and their families who survive.

Carl Britt truly loved his life. He lived each day as if it were his last. He arose with the sun each morning, his favorite time of day, to tackle his daily plans, of which there were many! He was a master gardener and could be found at “the garden” every day. It was his homeplace, a place of peace and contentment. Carl was a source of almost 96 years of information, and he shared it with many, who were blessed to have him as a friend and mentor. He was fiercely proud of his upbringing, his family, his community and church, his country, and the joys and struggles of his 95 years.

The Britt family offers special thanks to all of our neighbors and friends who have been so kind and helpful to our family. We love you all. The Britt family would also like to thank Dr. Matthew White and the Cardiac ICU staff at Wake Med, Dr. Jonathan J. Jack, Dr. N. Rajan, and Dr. R. Balla for providing long-term care, as well as Dr. Wesley at Vidant North, and Northampton County EMS.

According to the U.S. Department of Veterans Affairs, approximately 240,000 of the 16 million Americans who served in World War II were alive in 2021. It is estimated that 234 veterans are dying every day and that they will nearly all be gone by 2032. On May 1, our country lost another member of the Greatest Generation. Rest in peace, Carl Russell Britt. You are loved by many and your service to God, family, and country will never be forgotten.

Askew Funeral and Cremation Service in Jackson is honored to serve the Britt family.