Cartwright saved the best for last as he recorded his first three-hit contest of his career to pace the Hawks with a pair of singles and a double. Tyler West added two hits. 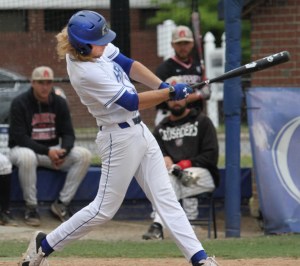 Krack picked up a strikeout in relief. Mariano tossed a pair of scoreless innings with three strikeouts.

Trailing 7-0, the Hawks looked to rally in the bottom of the second as Ryan Bellamy drew a walk followed by Cartwright and Ethan Whelan finding the hole through the left side of the infield with one out, but the Hawks failed to score with the bases loaded.

Cartwright led off the bottom of the fourth with a double to center, but was left stranded.

Despite being down 14-0, Chowan refused to quit. West opened the bottom of the sixth with a single through the left side of the infield. He moved to second on a wild pitch before coming around to score on a single by Caleb Karie.

In the bottom of the seventh, Landon Oughton drew a one-out walk before Trevena hit a double into the left center gap to put a pair of runners in scoring position. Krack drew a full-count walk to load the bases, but a double play would end the threat.

Cartwright opened the bottom of the eighth with a single to center.

Ethan Robinson picked up a single in the ninth to conclude the contest.

Chowan finished its season at 8-33 overall.