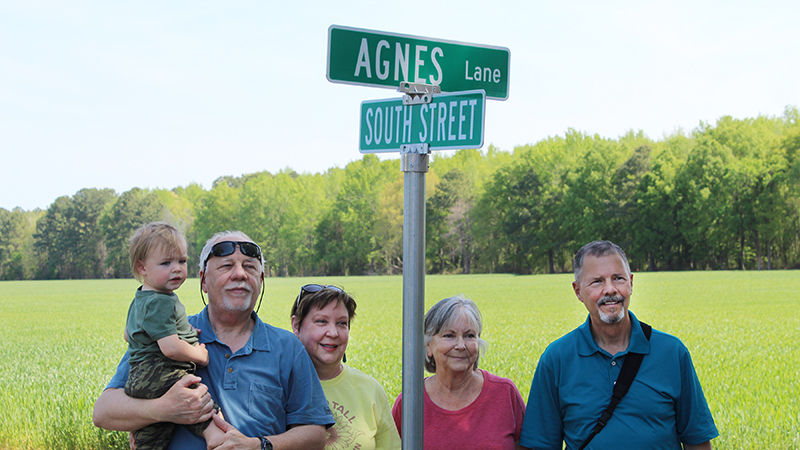 LASKER – Two brand new street signs were unveiled on Saturday, April 23 at a celebration in honor of a Lasker resident whose memory still lives on two years after her passing.

Union Street, which connects Garris and South streets within the town, will now officially be called Agnes Lane, named in memory of Agnes Lassiter. 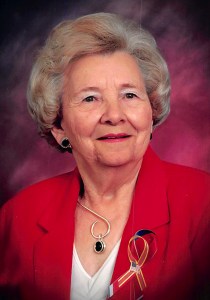 Agnes Lassiter spent the majority of her life in Lasker prior to her death in May 2020. Contributed Photo

Lassiter passed away in May 2020 but would have celebrated her 99th birthday on April 28 this year. With the exception of her last few years spent in a nursing facility, she was a lifelong resident of the town and spent a majority of those years living with her husband on the street which now bears her name.

“We all knew who Agnes was,” said Lasker Mayor Dick Collier, speaking to friends, neighbors, and family who gathered for Saturday’s event. “She was always sweet and always kind to everybody. She loved this town and the people in it. I’ll never forget that.”

“Agnes was a super person, and I just feel proud that we can name this lane after her,” he continued.

Collier credited Jonathan Morris, who now lives in Lassiter’s old home, as the one who came up with the idea. After the suggestion was made, the Lasker Town Council agreed and then went through the procedure for the street name change.

“I’ve never met anyone [like Agnes] who had a smile on her face all the time,” Collier said. “Anything you needed, she always had it.”

Others in attendance also shared memories of Lassiter, especially her cooking skills and her hospitality. They spoke of homemade pies at Christmas and a warm welcome to the town for new people. They recalled many dinners at Lasker Baptist Church where she always made sure there was enough food to go around. She was also famously known for her homemade Milky Way ice cream.

“Agnes was so proud of this town,” said Joyce Sumner, who was Lassiter’s neighbor for over 30 years. “I had the honor to take her many places, and nothing thrilled her more than when somebody would ask where she’s from.”

“She’d always say ‘I’m from Lasker. We have a country club, a private school, a Baptist church, a country store, a stoplight, and a fire department, and it’s all on the same street,’” Sumner recalled with a laugh.

Even when Lassiter lived in the nursing facility, Sumner said she remained devoted to her hometown.

“I’d pull up a chair and she’d want me to go down every street in Lasker and go house by house, and tell her what was going on in that person’s life. So her heart was always in Lasker,” Sumner added.

Sumner commended the idea of changing the road name in honor of Lassiter, recalling many times she’d opened up her home during the annual Lasker Summer Music Festival or cooked a meal for neighbors when someone was sick or had suffered a death in the family.

Even though she’s passed on now, Lassiter’s impact on the town remains strong. And the new road name will ensure her memory lives on as well.

“She just was a classy lady. Never knew a stranger. When you said the name Lasker, Agnes Lassiter went with it,” Sumner concluded.