KENYON, MN – Gale West, age 93, formerly of Kenyon, entered his home in heaven on April 5 surrounded by his loving family.

Gale was born in Paulina IA and was one of 10 children. He met the love of his life, Glady, on a blind date and they were married shortly after so Glady could move with him when he entered the US Army. Gale was proud to be a Korean War veteran. 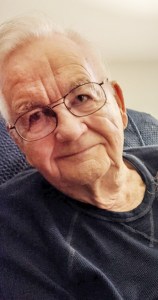 Together he and Glady raised five children, Jerry (Bridget), Garrel (Mark) Steneman, Janet (Pat) Kruse, Jim (Amy) and Nancy (Jeff) Solinger. Later they also assisted a St. Olaf student who has also been unofficially adopted into the family, Dr. Benjamin Arthur. They were blessed with 17 grand children and 26 great grandchildren.

He leaves four siblings and many close friends behind, which was apparent by the number of calls and visits he received.

His careers included driving heavy equipment used for building dams and roads, managed co-ops in Cambridge and Webster, driving a bookmobile, and maintenance work at a senior living community.

He attended Minnesota Bible College in St Paul with aspirations of becoming a minister but changed gears when he realized his fear of public speaking!

Gale and Glady enjoyed travels to Alaska, Europe, both coasts, Hawaii and the Bahamas and later enjoyed their retirement in their lake home in Backus. After selling their lake home, they moved to Kenyon where they spent many days and hours driving their golf cart around town. They attended New Life Church in Wanamingo. When Gale moved to Apple Valley, he continued to watch services online and enjoyed visits from church family in his new home.

Over his many years, Gale played many musical instruments, including harmonica, bass guitar, piano and organ. He was also a wood worker, trapper, deer hunter, fisherman, gardener, bird watcher, animal lover (except squirrels), cribbage player, Sunday school teacher and prayer partner to many young people in the churches he attended. He took up knitting just recently and completed five scarves that he gave to loved ones. Anyone who knew him knew that he didn’t hate, except for onions; and was always honest, except for fish stories.

Gale was a believer in caring for those in need and supporting his community. He believed in supporting local business and law enforcement.

The family wishes to express their thanks to the Minneapolis VA, Ecumen Seasons at Apple Valley, the wonderful staff at 3 Links in Northfield and Allina Hospice.

Gale’s wish for you is if you need more information about salvation, reach out to nlcwanamingo.org.

Services will be held at New Life Church in Wanamingo on Saturday April 16th at 2:00 p.m. The service will be live streamed and will also be available online.