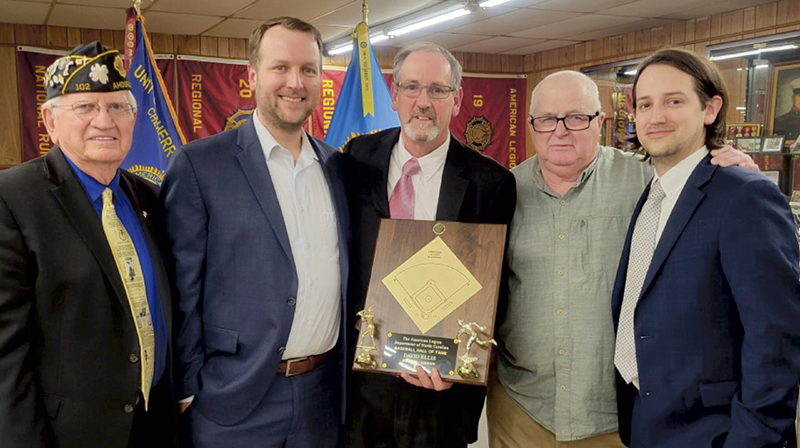 AHOSKIE – Since the age of five, David Ellis has enjoyed the sport of baseball at all levels…a player, an umpire, and a coach.

Last Saturday, 22 days shy of his 62nd birthday, Ellis was honored for that lifelong affection of the “National Pastime” by being inducted into the North Carolina Legion Baseball Hall of Fame.

The 2022 Hall of Fame banquet was held in Cherryville.

Ellis becomes the fifth individual from Ahoskie American Legion Post 102 to be enshrined in the state Hall of Fame. There he joins Wayne Meeks and Chris Towell, along with the late Jim “Catfish” Hunter and the late Johnnie Ray Farmer.

“The Hall of Fame is certainly an honor and I’m extremely proud to join the list of Hall of Famers. To be a part of this group that has been instrumental in the success of American Legion Baseball in North Carolina is truly unbelievable,” Ellis stated.

Ellis, a native of Rocky Mount who played high school, American Legion, and collegiate baseball, moved his family to Ahoskie in 1990 at which time he was named as the Territory Sales Account Manager for Dillon Supply Company, covering Northeastern North Carolina and Southeastern Virginia.

It was during the summer of 1991 when his oldest son’s (Eric) team needed a tee ball coach that he really started his life of coaching. Since 1991, Ellis has been coaching every year and has coached every youth division in Ahoskie (two times because his youngest son Travis started to play) from Pee Wee, Junior League, Little League, Pony League, AAU, high school fall ball, Junior American Legion and Senior American Legion.

In the summer of 2002, Ahoskie Post 102 started playing American Junior Legion Baseball and Ellis volunteered to be one of the team’s first coaches.

“Since 2007, David has been coaching either the Ahoskie Junior or Senior team, alternating back in forth,” said Meeks, who serves as the Post 102 Athletic Director.

Meeks added that Ellis led the 2017 and 2019 Junior Legion teams to the state playoffs. The 2019 team set a record for the most wins in program history. That team finished third in the state championship tournament.

“Coach Ellis is a player’s coach with a likeable personality and over the last 30 years he has literally touched the lives of hundreds of kids. There are very few baseball players in the area that haven’t played for Coach “Super Dave” at some time in their life,” Meeks said. “He also has given several young men their first coaching opportunities.

“Coach Ellis continues to grind and is already scouting, raising money, and thinking about another baseball season and how to keep Ahoskie Post 102 Baseball afloat for their 28th year in 2022,” Meeks added. “He is truly deserving of this Hall of Fame honor.”

Ellis said he is proud to be a part of the upcoming 28th season of Post 102 baseball.

“We are a small program and have to travel 60-to-120 miles for every away game,” he said. “Our player pool is limited; we pull from 2A schools, 1A schools and private schools. We have no 3A, 4A schools in the area and not many college players to pull from. For example, both Wayne County and Garner [Legion teams] will cut more players than we have tryout for both of our programs.

“One reason we struggle on the Senior level is that most of our college age kids do not play college ball, so each year they are way behind when the season begins,” he added. “Over the years we have had success on the Junior level, but the competition is different and we also we play against high school-based teams with younger players. A good Senior year for us is four-to-six wins, so it’s obvious we aren’t in it just to win. We do take pride in our program and make sure our kids act proper and respect Legion Baseball codes and sportsmanship.”

Ellis stressed that some overlook American Legion baseball and rather play “travel ball.”

“This is 2022, if a kid can play, a college coach or major league scout will find him. There is no need to pay thousands of dollars to show off their skills. Catfish Hunter was found 60 years ago in little old Hertford and there wasn’t any social media and access like there is today,” Ellis stressed.

He closed by saying, “For over 30 years it has always been a joy to me to coach kids and see them progress and enjoy playing the game. To see a kid I coached years ago and come up and say how they enjoyed playing for me always is heartwarming. I like keeping up with my former players and now I’m coaching some of their kids. It’s been a fun ride along the way and it’s truly an honor to join the NC Legion Baseball Hall of Fame.”