AHOSKIE, NC – Mrs. Betty Rose Duke, 90, passed away on January 29, 2022 surrounded by family and friends after an extended illness. Mrs. Duke, who was born and raised in Woodland, NC, was the youngest and last surviving child of the six children of Emmett and Cappie Joyner Rose. 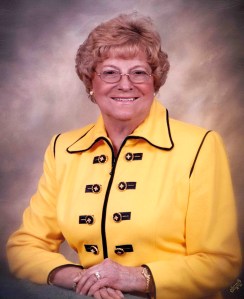 Shortly after Willie died in 1998, Betty returned to Ahoskie, NC to be near family. During her years in Ahoskie, Betty was active in the affairs of Chowan University, where she became a member of the Board of Trustees and was an active member of the First Baptist Church of Ahoskie.

She was preceded in death by her husband of almost 50 years, Willie Duke; and her grandson, Thomas Duke Benthall.

She is survived by her daughter, Mrs. Tula Polvadore and husband Don of Ahoskie; her granddaughter, Mrs. Abigail Wilkins, husband, Dylan, and great-grandson, Harrison, of Chesapeake, VA; her sisters-in-law, Mrs. Mary Smallfelt of Littleton, NC and Mrs. Linda Williams and husband Edward of Colerain; and many nieces, nephews, and friends left to cherish her memory as well as her beloved caretakers.

A celebration of life service will be held at the First Baptist Church of Ahoskie on March 5, 2022 at 10:00 a.m. with Rev. Paul Gilliam officiating. Her entombment will be in Fayetteville, GA with her husband.

In lieu of flowers donations in her name may be made to the Ronald McDonald House of Charlottesville, VA in honor of Harrison Wilkins, 300 9th Street SW, Charlottesville, VA 22903 or to the Capital Building Fund, First Baptist Church of Ahoskie, P.O. Box 649, Ahoskie, NC 27910.

Garrett-Sykes Funeral Service – Ahoskie Chapel is handling the arrangements for the Duke family and online condolences can be directed to the family by visiting www.garrettsykesfs.com.