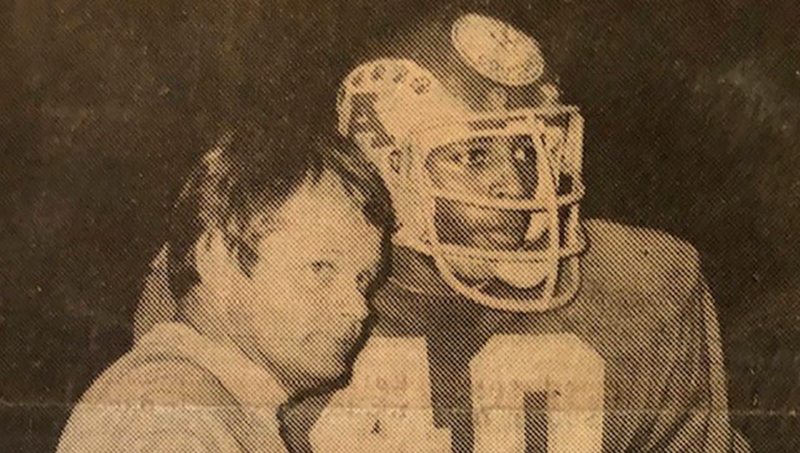 In the early to mid-70’s, Timmy Newsome was a standout two-way starter for coach Daryl Allen at Ahoskie High School. Contributed Photo

Last week, the North Carolina Sports Hall of Fame announced its list of inductees for 2022. Joining Newsome – who played collegiately at Winston-Salem State University, where he stands as the second all-time leading rusher in school history, and professionally as a member of the Dallas Cowboys – in the Class of 2022 are Luke Appling, Missouri Arledge, Ronnie Barnes, Henry Bibby, Dan Brooks, Torry Holt, Sam Mills, Dave Robbins, and Tom Suiter. 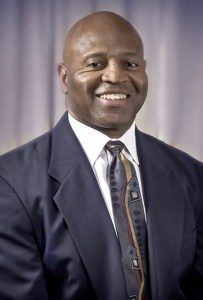 The members will be enshrined during the 58th annual induction banquet on the evening of Friday, April 22, at the Raleigh Convention Center. A news conference will occur earlier in the day at noon at the North Carolina Museum of History.

“I’m honored and humbled by the selection for induction into a hall of fame that includes Michael Jordan and Dean Smith,” said Newsome in an interview with the R-C News-Herald. “Growing up in Ahoskie, my thought process was always focused on a career in business and not sports. My decision to attend Winston-Salem State University was made to keep my parents from having to pay for my education, and playing football allowed me to do that.”

The son of the late Louis E. Newsome and the late Dr. Dimple M. Newsome, an Ahoskie Middle School teacher and former chairperson of the board at Shaw University, said excelling in and playing football was a privilege, both in college and professionally.

“My parents provided a solid foundation in that regard,” Newsome noted. “My mind and body were late in developing and being patient while that happened paid off.”

Newsome’s illustrious Ahoskie High School career was studded with all-conference honors in football, basketball and baseball. He was selected team captain in football and basketball. However, it was football where he excelled. He played on teams that went 32-5-1 during a three-year period, and as captain of the defense as a senior, that unit yielded only 32 points with eight of those games being shutouts.

In 1974, the team, coached by the now late Daryl Allen, was a finalist in the State 3A Championship game vs. Jamestown Ragsdale High School. The Cougars finished that season with a 13-1 record.

He concluded his high school career by playing in the then-annual North-South All-Star Football Classic in Greenville. His team was coached by Jimmy Addison from Edenton Holmes High School, and Newsome was the only two-way performer in that game, playing running back and safety.

In the spring of 1976, Newsome accepted an athletic scholarship from Winston-Salem State University (WSSU) as a running back. With Newsome as a key player, WSSU achieved back-to-back undefeated regular seasons in 1977 and 1978 with its number one NCAA Division II (D-II) national ranking.

He ended his collegiate career as the all-time leading rusher in CIAA history. Averaging only 16 carries a game during his four-year career, Newsome rushed for 3,843 yards (6.1 yards per carry) and 38 touchdowns. He was the CIAA’s leading rusher and scorer in 1977, 1978 and 1979.

The Dallas Cowboys selected Newsome (6’1” and 235 lbs.) in the 6th round in the 1980 draft. As one of the strongest Cowboys team members, Newsome played three different positions – running back, fullback and tight end. 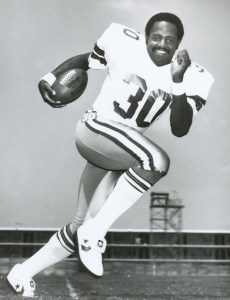 Timmy Newsome spent nine seasons with the Dallas Cowboys where he played three different positions – running back, fullback, and tight end. He scored 30 touchdowns running and receiving during his pro career. Contributed Photo

Scoring 30 touchdowns running and receiving, Newsome enjoyed a nine-year career with the Cowboys, finishing as the ninth leading receiver in the team’s history. He was named to the Dallas Cowboys Weekly Newspaper’s all-decade team (1980-1989).

Though his on-field performance during his time with the Cowboys was impressive, Newsome was most admired for his off-season pursuits. Gil Brandt, then Dallas Cowboys’ director of pro personnel, and now a member of the Pro Football Hall of Fame, assisted Newsome in securing a full-time job working as a contract computer programmer/analyst.

In the spring of 1991, two years removed from pro football, Newsome founded Newtec Business Solutions. Now in its 31st year, the company’s specialties continue to include securely merging voice and data, network integration and managed services, with an emphasis on security focused cloud-based solutions, database design and implementation, unified endpoint management, and implementations for Microsoft Dynamic 365 and Microsoft 365 (SharePoint).

In addition to founding and growing his firm, Newsome has dedicated a significant portion of his time and resources to supporting youth empowerment and education in his community. He currently serves on several boards, including the Computer Science Industry Advisory Board for Winston Salem State University Department of Computer Science, and on the Board of Directors for Children At Risk (Dallas, Texas), NAMI North Texas (a mental-health organization), and Hugs Cafe (mental and physical disabilities).

That quote fits his life perfectly.

“As the first athlete from Hertford County to be selected to the North Carolina Sports Hall of Fame is somewhat surreal, considering the great athletes to come from here. I certainly hope I’m not the last,” Newsome stressed.

As for the other members of the 2022 Hall of Fame Class, Appling, a native of High Point, is one of seven native North Carolinians in the Baseball Hall of Fame. He played 20 years in the major leagues, all with the Chicago White Sox (1930-1950) where he was a seven-time American League all-star and twice was the AL batting champ.

Arledge was a star athlete at Durham’s Hillside High, from which she graduated in 1953. Arledge tallied 31.3 points per game during her senior basketball season. She went to Philander Smith College in Arkansas, scoring 21.0 points per game as a sophomore and becoming the first African American woman to play in an AAU tournament (1954) and the first to be named AAU All-American in the following season. Following college, she had an offer to be the first female to play with the Harlem Globetrotters.

A native of Franklinton, Bibby was the starting point guard on UCLA men’s basketball teams that won three straight NCAA championships in the early 1970s, averaging 14.4 points per game for his career and earning first-team All-American honors in 1972. He played nine NBA seasons, winning a title with the New York Knicks in 1973. As the head coach at the University of Southern California, he led three teams to the NCAA tournament, including an Elite Eight trip in 2001.

Brooks, a 1981 graduate of Oregon State University, has put together a brilliant career of unprecedented success in almost 40 years as head women’s golf coach at Duke University. The seven-time National Coach of the Year guided his teams to seven NCAA national championships and 21 Atlantic Coast Conference titles, and his 140 team victories are the most of any women’s golf coach in NCAA Division I history.

A native of Gibsonville and a star high school athlete at Eastern Guilford, Holt was a standout student-athlete at NC State where he set numerous school records, earned first-team All-American honors and was the ACC Player of the Year in 1998. The sixth overall pick in the 1999 NFL Draft, Holt had an amazing NFL career, primarily with the St. Louis Rams, winning a Super Bowl and going to seven Pro Bowls as part of the “Greatest Show on Turf.” Holt led the league in receiving yards twice and was selected to the NFL’s All-Decade Team of the 2000s.

Mills played 12 seasons as a linebacker in the NFL, including his final three with the Carolina Panthers, where he became a beloved star, and his NFL career occurred after several excellent seasons in the USFL. A three-time conference defensive player of the year in college at Montclair State, Mills played in five Pro Bowls and led the Panthers in tackles twice.

Robbins grew up in Gastonia where he was an excellent athlete at Ashley High, and later went on to a tremendous career as a men’s basketball coach. He is best known for leading NCAA Division II power Virginia Union University to 713 victories and three NCAA national championships, as well as 14 CIAA titles. His winning percentage at Virginia Union is an excellent .786 in 30 years.

Suiter, a native of Rocky Mount and a graduate of Erskine College (SC), had a remarkable career as the sports anchor for WRAL-TV in Raleigh for 45 years (1971-2016), although he retired from the newscasts in 2008. The recipient of two regional Emmy Awards and the 1990 NC Sportscaster of the Year, he covered 24 NCAA Final Fours and created the revolutionary “Football Friday” coverage, featuring high school football highlights, as well the “Extra Effort Award” for student-athletes.

The NC Sports Hall of Fame was established in 1963. A permanent gallery, the North Carolina Sports Hall of Fame is located on the third floor of the NC Museum of History in Raleigh and features significant objects and memorabilia donated by inductees. The museum is open Monday through Saturday from 9 a.m. to 5 p.m. and Sunday from noon to 5 p.m. Admission is free.