AHOSKIE – They may no longer reside in the same conference, but that fact hasn’t squashed the decades-old rivalry between Hertford County High School and Bertie High.

The schools – separated by less than 20 miles – squared off at HCHS on Saturday night where the Bears swept their rivals. 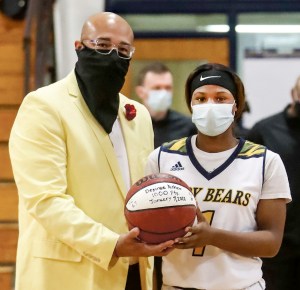 Prior to Saturday’s game vs. Bertie, Desiree Askew was presented a ball representing her 1,000th career point that came as part of her 24-point performance on Jan. 7 during a 67-37 win at First Flight High School. Lady Bears head coach Hermea Pugh Jr. is shown making the presentation. Photo by William Anthony

In the varsity girls game, HCHS trailed 32-23 at halftime, but used a 14-3 scoring advantage in the third quarter to take control en route to a 51-42 win.

Desiree Askew led the Lady Bears with a triple double: 30 points, 15 rebounds and 10 steals as HCHS improved to 11-2 overall.

The Hertford County varsity boys improved their record to 10-4 overall with a 70-56 win over Bertie. No individual stats were available for either team.

With Saturday’s wins, Hertford County swept the season series against Bertie. The two teams met at Bertie on Dec. 4 where HCHS won both games (girls: 45-45; boys: 77-52).

Other than Saturday’s victory over Bertie, the HCHS boys enjoyed a successful week on the court. On Jan. 13 at Manteo, the Bears came away with an 89-70 win. Two night earlier (Jan. 11), the Bears traveled to Camden County where they won, 68-58.

This week the Bears are scheduled to host conference foes Edenton Holmes on Jan. 18 and Currituck County on Jan. 21 before stepping outside of league action with a Jan. 22 road trip to Gaston to tangle with Northampton High School.