Mrs. Speight was born in Gates County on August 8, 1940, and was the only daughter of seven children born to the late James Kindred and Mary Polly Mullen Parker. In addition to her parents, she was preceded in death by her husband of over 51 years, Frank Harvey Speight who died in 2019, and by brothers, Tommy, Douglas, and Joe Parker. 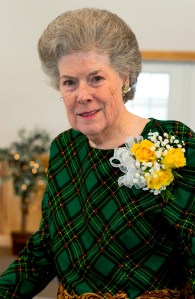 Retired from Kellogg-Morgan Insurance Agency after 29 years of employment, she was a faithful member of Philadelphia United Methodist Church where she served as the recording secretary of the Administrative Council. Other memberships enjoyed included the Cars Are Fun Antique Auto Club, where she and Frank enjoyed riding in their 1941 Ford 2-door Sedan or their 1950 Ford Pick-Up Truck.

Funeral services will be held Wednesday, January 19 at 2:00 p.m. in Philadelphia United Methodist Church and will be led by her nieces, Jeannie Ginn and Joy Byrum. The burial will follow in the Cross Family Cemetery.

Due to the resurgence of the Covid Virus in the area, no formal visitation is planned; however, friends may speak with the family in the church immediately following the service.