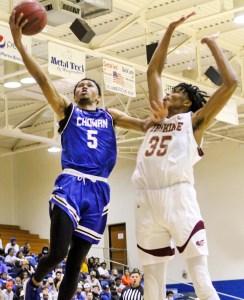 Chowan’s Chase Barnett (#5) is shown here in action during an earlier game this season. On Tuesday night at Francis Marion, Barnett had 11 points, seven assists, and six rebounds to help the Hawks claim an 82-79 win. Photo courtesy of Chowan University

The game was tied at 77-77 with 61 seconds remaining. Koonce then gave the Hawks the lead with a turn-around jumper. The Patriots would answer on their next possession with a putback bucket after grabbing two offensive rebounds.

On the final possession for the Hawks, Traore was fouled with 4.1 seconds remaining. Traore would go 1-2 from the stripe to give the Hawks an 80-79 advantage. Traore’s size hindered the in-bounds pass as FMU bobbled the pass and turned the ball over with 1.9 seconds remaining and was forced to foul with less than a second to play. Estime knocked down both free throw attempts to seal Chowan’s victory.

The Hawks started off strong, knocking down a trio of three-pointers as Marcus Elliott, Koonce, and Estime connected from deep to race out to a 9-2 lead. The run would continue as the Hawks moved their advantage to double-digits, 18-6. Traore posted a pair of buckets prior to a three-pointer by Koonce and a pair of free throws by Estime.

FMU cut into the deficit prior to Barnett and Estime connecting from the floor followed by Koonce adding a pair from the stripe to lead 24-11.

Barnett would end the run with a three-pointer to hand the lead back to the Hawks, 29-28. Koonce and Jay Estime connected from the floor as FMU answered with a 7-0 run to lead 37-34.

Koonce recorded an old-fashioned three-point play prior to Wilson and Barnett picking up points at the charity stripe to even the score at 40-all. FMU would take a 42-40 lead into the locker room.

To open the second half, Estime knocked down a pair of three-pointers, Koonce also connected from beyond the arc and Barnett hit a jumper to stake Chowan to a 54-52 lead.

Elliott sparked a 13-2 run with a layup in transition following a steal. Estime connected from deep along with back-to-back three-pointers by Koonce and a jumper by Wilson pushed the advantage to 67-57.

Francis Marion answered with a 10-2 run to cut the deficit to 69-67. Donavon Martin connected from the floor to slow the run. Koonce ended the run with a layup and free throw. Barnett added a layup to push the lead to 74-67 before Francis Marion rallied to tie the game at 77-all.

Chowan is scheduled to take on Mount Olive at home in Conference Carolinas action on Thursday, January 13. Tip-off is slated for 7 pm.