MURFREESBORO – After numerous heartbreaking losses, the Chowan University men’s basketball team and their first-year head coach Rob Burke finally have something to smile about.

The Hawks used a late offensive surge to battle back from an eight-point deficit with four minutes remaining to gain their first win of the season, 79-76, over King University here Saturday afternoon in Conference Carolinas action on Saturday afternoon. 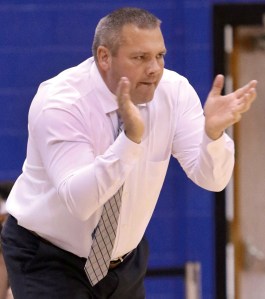 Head coach Rob Burke encourages his players in a recent game. On Saturday, Burke and Hawks notched their first win of the season after beating King University, 79-76, at home. Photo courtesy of Chowan University

In his first action of the season, Marcus Elliott did not disappoint with a 22-point performance, going 8-14 from the floor. Donavon Martin added 15 points and nine rebounds to go along with three blocks and five steals. Daylen Askew contributed 12 points.

The win marked the first victory for coach Burke at Chowan.

King held a 74-66 lead with 4:04 remaining before the Hawks went to work on their game-winning effort.

Christian Koonce and Cheick Traore sparked a 13-2 run with a pair of buckets. Askew knocked down a triple from the corner to even the score with 1:46 remaining.

At the other end following a King timeout, Martin came up strong with a block. Askew gave the Hawks the one possession lead hitting 1-2 from the stripe.

A pair of buckets from Martin, an Askew three-pointer, and a basket each by Jaylen Dilliard, Wilson, and Elliott staked the Hawks to a 16-13 lead in the game’s early stages.

After King rallied with a 9-2 run, Chowan matched it with one of their own to lead 29-24. Martin started the run with a jumper before Elliott scored the next five points and Chase Barnett hit a jumper.

Barnett opened the scoring in the second half with a layup followed by a three-pointer from Jay Estime to give the Hawks a 42-41 advantage.

The Tornado countered with a 10-2 run, but the Hawks answered with a dunk by Martin in transition, two free throws by Wilson and an Elliott jumper to close the deficit to one point (51-50), setting up a back-and-forth battle until Chowan’s late run sealed the victory.

Chowan (1-8 overall; 1-6 in league play) will take the rest of 2021 off as the Hawks will return to the court on Jan. 4 against nationally-ranked UNC Pembroke on the road.