RALEIGH – Today’s (Wednesday) welcomed rainfall is responsible for ending a ban on open burning in a majority of North Carolina counties, to include all in the Roanoke-Chowan area.

Additionally, a separate burn ban enacted by the Hertford County Fire Marshal was lifted as of 12 noon on Wednesday. 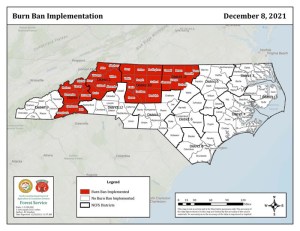 The ban, which went into effect Nov. 29 due to hazardous forest fire conditions, remains in place for the additional 33 North Carolina counties. Those counties are shown in red on the map included with this story.

“The rainfall we are seeing across much of the state right now is doing what we need it to do,” said North Carolina Agriculture Commissioner Steve Troxler. “Forest fuels are soaking it in, and conditions are improving.

Hertford County Fire Marshal Chris Smith lifted the burn ban he issued by proclamation on Dec. 1. That ban prohibited the burning of rubbish as well as bonfires extending 100 feet outward of a residence. Smith said Wednesday’s rainfall locally was enough to end the ban.

Residents with questions regarding their specific county can contact their N.C. Forest Service county ranger or their county fire marshal’s office. To find contact information for your local NCFS county ranger, visit www.ncforestservice.gov/contacts.