While Watkins can’t claim to be the G.O.A.T. (Greatest Of All Time) as Jordan is sometimes referred, he did close out his college playing days with a career-defining performance in the Hawks’ 28-12 win over Lincoln University of Pennsylvania here Saturday afternoon.

“It feels good,” the senior speedster said after the game. “I’d hoped to finish as the second leading receiver in school history, but now, I’ll just have to take it to the next level.” 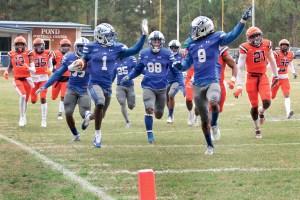 Imeek Watkins is joined by a host of teammates as he completes a 50-yard sprint to the endzone on a punt return in Saturday’s season-ending win at home vs. Lincoln University. Watkins, a senior, closed out his Chowan career in fine fashion with 150 receiving yards and a pair of scores in addition to his punt return. Staff Photo by Cal Bryant

Watkins and all his teammates – especially the seniors making their last appearance on the Garrison Stadium turf – helped first-year coach Mark Hall end his inaugural 2021 season at the helm on a winning note. The victory was Chowan’s seventh (7-3), and most for the school as a NCAA Division II program, and which matches the win total from 1983. They also finished 4-3 in the CIAA (Central Intercollegiate Athletic Association).

The Hawks spotted the visiting Lions a 3-0 lead midway through the first quarter before quarterback Bryce Witt finished off Chowan’s third drive of the game with a short one-yard pass to Watkins and a 7-3 lead after the Jude McAtamney PAT kick.

Chowan’s second touchdown was a lot more spectacular as Watkins corralled a Lincoln punt on one bounce at the 50-yard line, and with a phalanx of teammates leading the way, sprinted down the sideline to paydirt en route to a 14-3 Hawks advantage. Late in the quarter, Lions quarterback Isaiah Wilson completed Lincoln’s first passing touchdown of the season, and the teams entered the mid-break with Chowan ahead, 14-9.

Neither team scored through the first 13 minutes of the third quarter, before redshirt freshman receiver JaQuan Albright took a snap in wildcat formation and streaked through the Lions defenders 66 yards for a score. That play helped push the Hawks’ lead to 21-9.

Witt started Chowan’s fourth quarter drive with an incomplete pass. He then completed three of his next four, including a 10-yarder to Watkins in the corner of the end zone that made it 28-9 following McAtamney’s fourth point-after kick. In all, Witt added two passing touchdowns on the day to tie the CIAA total touchdown record of 127, one he shares with former Bowie State “gunslinger” Amir Hall. Despite two more possessions, Witt fell short of the conference mark but threw for 275 total yards to go with a pair of scores and finish with 99 career passing touchdowns.

“I just feel so proud,” Witt remarked after the game. “I knew I had a shot at the record, but more importantly was getting the win, finishing with seven wins, and making this day most memorable for the seniors. We ended up with a winning record, winners in road games, and winners in conference. That’s such a blessing, and this really is a special place.”

Lincoln added a late field goal to complete the scoring.

Watkins’ total was 150 yards receiving and a pair of scores to go along with his 50-yard punt return for a touchdown. 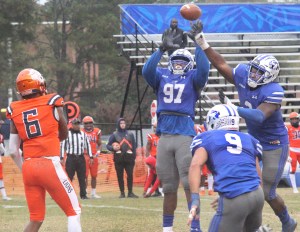 In holding Lincoln to 263 total yards, a trio of seniors had standout performances: Gilberto Ortiz led the Hawks with 10 total tackles and three quarterback hurries. Fariq Abdul-Wahid was in the quarterback’s face all afternoon with five quarterback hurries, and Keyshawn Douglas blocked a Lincoln point-after attempt.

“I don’t know what’s ahead,” said an emotional Ortiz. “I do know for me it will include more football. It feels so good to end things on a high note.”

“Lotta emotions right now, man,” said Abdul-Wahid, shivering shirtless in the evening chill after the game. “I remember when I first came here (in 2017, when he was on the CIAA All-Rookie Team), and I just wanted to go into every situation competing as hard as I could, just wanting to be the best. This moment, this time, has made it all worth it.”

Among underclassman defenders, Simeon Burns added seven tackles, a sack, and a forced fumble while Isaac Anderson collected his second interception of the season.

“I like the direction we’re headed with this program,” Hall said in his post-game radio interview. “I’ll enjoy this one for a while, then it’s back to work. Ten months goes by awful fast.”