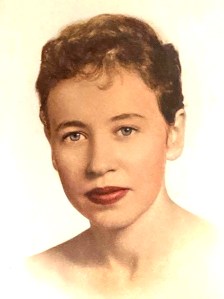 After finishing college, she worked for a brief time in the Genetics Lab at North Carolina State University. As many can attest, Nell was a diehard Wolfpack fan, and she attended many games at the university and watched NCSU sports incessantly on television. She loved wearing her red and white attire and cruising around in her red Mustang convertible.

Nell felt called to teach high school mathematics, and she spent her first year of instruction in Perquimans County, where she taught a young man named James Hunter, who later became known as “Catfish”. She liked to regale that if Jim was ever out of place, she always knew where he could be found — on the pitcher’s mound.

Nell then taught for a year in Weldon before coming back to Northampton County. She taught at Jackson High School for two years and then at Northampton East High School for the remainder of her career. She retired from teaching in 1998. It has been said that Nell probably holds the record for teaching the most students in Northampton County, given her long tenure, and it was obvious to all who knew her that her ‘kids’ as she fondly called her students were her life. During her retirement years, it was heartwarming to see the sparkle in her eyes when she interacted with her former students.

A few years after retiring, Nell opened the Jackson Mini Shops, which enabled her to stay involved in the local community. She ran her business until March 6, 2019, when she fell and broke her hip.

Nell fully recovered from two hip replacement surgeries and was able to enjoy the remainder of her life at the home she dearly loved with the assistance of some very special people – Mary “Jack” Ray, Marion Jordan, Phebie Deloatch, Elsie Cumbo, Pauline Daye, Katherine Deloatche, Irish “Ike” Bazemore, and Selma Johnson. Mary “Jack” Ray was a true angel who faithfully looked after Nell during the daytime (Monday through Friday) from the time she arrived home from rehab on June 1, 2019, until the day Nell was taken to Vidant North two weeks ago. For the first five months after Nell came home from rehab, Jack assisted her seven days a week! She was truly dedicated to Nell and will greatly miss her.

Nell will be greatly missed by her faithful Pomeranian, “Little Man” (aka “Sandy”), who has now found his forever home with her brother’s family.

A graveside service will be held on Sunday, October 10 at 2:00 p.m. at the family cemetery located beside Nell’s home at 1099 Fire Tower Road, Jackson (directly across from the fire tower). Pastor Andy Sloan will be officiating and Barbara Jernigan will be providing music.

In case of inclement weather, the service will be held at 2:00 p.m. in the chapel at Askew Funeral Home in Jackson.

Visitation will be held immediately following the service.