Go for the Gold! 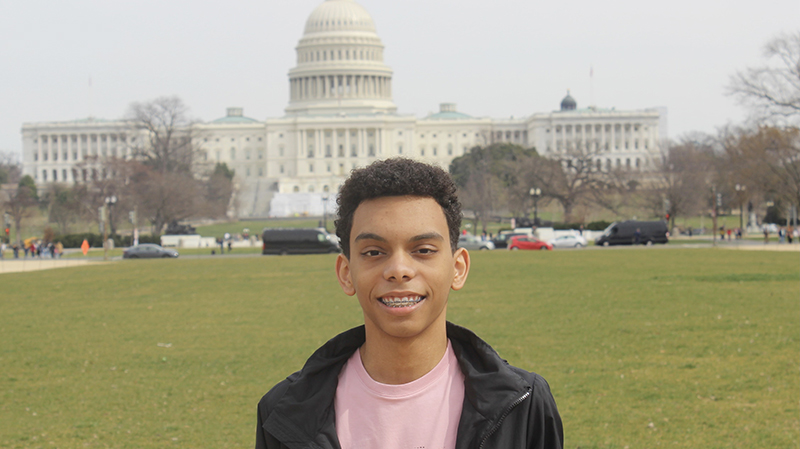 National Beta Club winner James Kenneth Brown, Jr. is pictured against the backdrop of the U.S. Capitol during a visit to Washington, DC. Contributed Photo

MURFREESBORO – It appears that Tokyo isn’t the only place where gold medals were being awarded this summer.

“I have been interested in social studies since elementary school,” said Brown, a rising senior at Hertford County Early College High School (ECHS).

“I read about different things on YouTube and online, including news articles. Some articles contain history,” Brown said. “I like Internet sites like podcasts on National Public Radio (NPR) and the New York Times.” 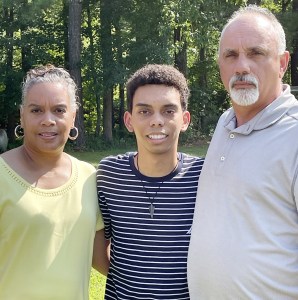 “During the school year, I have more of a routine,” he continued. “I go to school, come home and spend time with my family. With homework, I complete assigned readings and work on the questions. With history, if I have questions about a subject, I will watch videos and write about it.”

Brown noted that he likes connecting with people and learning about different cultures.

“History is not only what happened five hundred years ago, but five days ago, and how different people are in different parts of the world, states, or regions,” he said. “There are certain areas of social studies I like more, like civics.”

In civics, Brown explained his fondness for learning about different forms of government, and different wars.

“Why do we fight [wars] and how can we resolve that [issue] in the future,” he noted.

“Through his classes here, he’s become interested in history. James has already accessed information on colleges and program expectations for a history major. He’ll do great things,” Britt said.

“While taking science classes, I realized medicine was not for me,” Brown admitted. “I did well in science but realized I was more interested in social studies.”

“When preparing for the [Beta] competition, I was still taking classes, so I couldn’t shift too much,” Brown added. “I had never competed at the state level before. I prayed a lot, asking God for wisdom. I reviewed American history, world history and geography.”

“After finishing my homework, I’d start reviewing information,” he said. “The state and national tests were online. The national test was similar to one in an online class. It was timed, lasting almost one hour.”

Lacks was a Black woman living in the early 1950s, who was diagnosed with cervical cancer. She went to Johns Hopkins Hospital in Baltimore, Maryland. After Lacks died, they found that her cancer cells doubled every 20 to 24 hours. Her cells created a cell line that could grow outside the body. Lacks’ cells were being shipped out and sold across the world. Her family didn’t know. This happened before health privacy and informed consent.

“James has been an honor student his entire time here,” Britt said. “He has excelled academically, was a marshal at last year’s graduation, serves in the Student Government Association, and is a peer tutor. He’s always willing to help. He’s a good speaker who has spoken on multiple occasions.

“James is well liked,” Britt continued. “He’s willing to help his classmates and is an all-around good kid.”

“James always worked really hard on it,” said project coordinator and ninth- and tenth-grade English teacher Jennifer Smyth. “Because of COVID, students worked on other projects. James created amazing graphics and posters for the food desert project. He observes how everyone works best and works around that. He’s one of the most selfless people I know.”

“James is the exact kind of student we want in our program,” Britt emphasized. “He sets goals for himself and follows through. I’m very proud to have him in our program.”

“James is one of the more meticulous students I’ve ever taught,” said Michael Kinkead. “He gets into the roots of the subject. James’ research level is incredibly high for someone his age.

“His personality and ability to get along well with others sets him apart,” Kinkead added. “James doesn’t have a standard clique.”

“James has many traits of an historian,” Kinkead stated. “He looks at the question within the question – ‘what else spawns from this?’ In the last year or so, he’s been asking more questions about history including employment options. I can see James going from undergraduate to graduate school. I think James will be a valuable member of the social studies community.”

“James has a very positive rapport,” said co-sponsor and science teacher Kenyatta Ward. “He works independently and is auditory – he remembers information he hears.

“I’m very proud of James and was not taken aback when hearing he won nationally,” Ward added.

“James has participated in several Beta Club community service activities,” said Pamela Scott, co-sponsor and eleventh- and twelfth-grade English teacher. “He collected pet food for the animal shelter, and collected gloves and other needed items for area nursing homes in 2019.”

Scott said this year’s Beta Club convention was a virtual event due to COVID.

“I sent a message asking who wanted to participate, and James was the first to respond,” she stressed. “He first chose reading and language arts, but a peer wanted that subject. So, James chose social studies. He undoubtedly would have placed in English.

“I’m looking forward to the next state and national competitions,” Scott added. “I know James will excel in any competition. We hope that as more students see James’ achievement, more students will participate.”

“James likes to incorporate a lot of family time,” said his mother, Rhonda Brown. “For example, he encouraged us to watch ‘The Chosen,’ a streaming series.”