ATLANTA, GA – Ahki Benton’s dreams of being a star football player came to a sudden end due to an injury.

However, as Benton discovered, there are other ways to stay close to a game he so dearly loves.

The 2004 Hertford County High School graduate has been hired as the Defensive Coordinator (DC) at Atlanta Metropolitan State College. The college was founded in 1974 by the state of Georgia for Black students. The football program and sports are new starting in spring 2022. 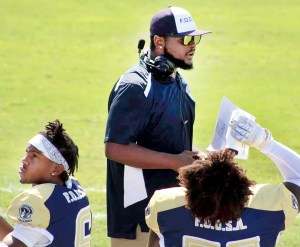 “I look forward to being the DC,” Benton said. “Being at a new program isn’t new for me. My last coaching position was at Field Of Dreams Sports Academy was a new program. We finished with an 8-3 record and 95% of our guys earned college scholarship offers.”

Benton began his coaching career in 2006 at Hertford County High School. He then followed his mentor Greg Watford as an offensive assistant at his next four coaching stops.

He became the Defensive Coordinator at Virginia A&M in 2017 which led to the job at Field Of Dreams Sports Academy. Over the past three seasons his defensive units have allowed a stingy 12.4, 12.0, and 13.5 points per game.

“When I first became a post-grad coach my goal was to bring the spotlight to Hertford County specifically,” Benton recalled. “I felt as though we had too much talent here being overlooked and not going to the next level. I wanted to add another avenue for our kids.

“The further I have progressed in my career my goal is to come to bring the spotlight to the whole 252 area code,” he continued. “High school football east of I-95 doesn’t get enough respect in North Carolina. There are solid coaches and players throughout the region and my goal is to give them another avenue. I’m a firm believer that if I can recruit the 252 area code as well as the 757 area code in Virginia we can compete with anybody in the country.”

In an effort to showcase the region’s talent, Benton was part of the Legacy Bowl three years ago, an event featuring high school and middle school players.

“I want to send a major shout out to La’Kendrick Lee Sr., Bobby Chad, and Jamal Lewis for all the support,” he said.

He also praised other coaches who made such a big impact on his quest to become a football coach.

“Greg Watford gave me my first coaching job in 2006,” Benton noted. “He along with Coach Dealton Cotton, Coach George Privott and Wallace Johnson were my biggest supporters and influences, and remain that way still to this day I call them when I need advice, along with Coach Monterio Hand of Virginia Union as well.”

Now with his new job, Benton will once again be tasked with the duty of recruiting talented players to fill his defensive roster.

“Recruiting Atlanta hasn’t been hard as we’re the only state junior college there,” he stated. “Recruiting the 252, specifically Hertford County, has been the hardest part. I feel as though it will be easier now that I’m at a college instead of a post grad program. Post grad doesn’t get financial aid normally so the cost comes completely out of pocket. At a college, our kids get federal financial aid and we also offer post grad options which will also be able to use federal financial aid.”

Benton reports to his new job in December. He is currently coaching at Bertie High School.