Jean graduated from Durham High School and Tillman Business School, and attended the University of North Carolina at Greensboro, formerly The Woman’s College of the University of North Carolina. She was a gifted artist, vocalist, and prolific writer of fiction and poems. She published her children’s book, Squeegee, the Meddling Octopus, at the ripe young age of 93! She also wrote numerous musical scores and plays. Her plays, The Portrait and Something Given were performed by the Woman’s Club of Jackson in the late sixties. While a member of the Roanoke-Chowan Cultural group, she was awarded the Bernice Kelly Harris Award for The Portrait. Her biography appeared in the Who’s Who edition of Personalities of the South in 1971 and that same year she was appointed chairman of the North Carolina State Music Society. She achieved national prominence in Walter Winchell’s column because of the inspiration and motivation she gave to soldiers while singing with Bob Astor’s Orchestra in South Carolina. 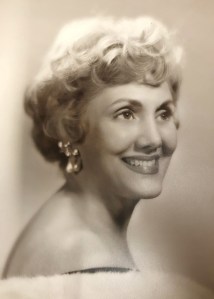 Jean was a member of Jackson United Methodist Church and in her younger years was actively involved in the Jackson community. She was a member of the Jackson Book Club, the Kirby Music and Literary Club, and L’Etude de Vin wine club for twenty-six years. She thoroughly enjoyed traveling and tasting and learning about wine. While president of the Jackson Women’s Club, she initiated the idea of the Jackson Christmas Parade, and in 2016 she was honored for that distinction. Jean was known for gracious and creative entertaining, using themed decorations for every party she hosted.

When Jean was just eleven-years-old, she won an audition on Old Man Happy’s Birthday Party Radio Show on WPTF in Raleigh, N.C. Soon after, Jean was asked to host her own radio show where she sang the popular songs of the day. When her family moved back to Durham, she was asked to sing with the Gene Germinio Orchestra, who had a weekly program on WDNC. She began her public singing and touring debut with prominent dance bands, including The Charlie Wood Orchestra and The Johnny Satterfield Orchestra.  She sang all along the east coast, predominately in North Carolina and Virginia.

The family would like to express their deep and heartfelt appreciation to Shquanner Allen, LaShay Allen, Dorothy Coleman, Ivy Ford, Stella Hargrave, Pearl Holley, Peaches Kee, Bernell McGee, Pamela Pitt, and her caregiver of more than 10 years, Clara James. We are so grateful for their steadfast love, care, and compassion over these many years.

A service will be held on Sunday, May 23, 2021 at 2 p.m. at Jackson United Methodist Church and conclude at Jackson Cemetery in Jackson, NC. A small gathering to celebrate Jean’s life will be held for friends and family immediately following the service at the home of Cheryl and Tim Boone, 308 Atherton Street, Jackson.

Although Jean adored receiving flowers, in lieu of them, memorials may be made to Southeastern Baptist Theological Seminary, 120 S. Wingate Street, Wake Forest, NC 27587.

Online condolences may be made to www.askewfs.com